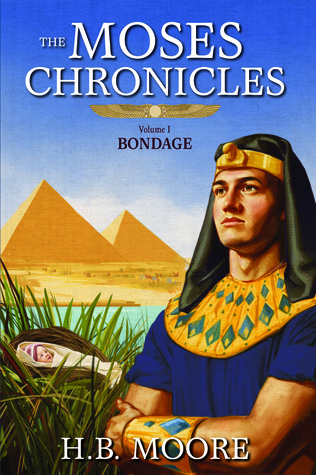 Moses has always felt like an outsider in his powerful Egyptian family, even though his close relationship with Ramses, the prince of Egypt, and their cousin Pentu keeps him entwined in the dealings of royalty. But when their youthful antics get them in trouble, the Pharaoh decides it’s time for all three of them to grow up and own their respective responsibilities. Now betrothed to a woman he cares nothing for, Moses wonders where his life is headed.

Miriam, a Hebrew slave, lives with a secret she cannot share with anyone. And though it has been eighteen years since she saved her baby brother, she is constantly getting in trouble for spying on him. In a desperate attempt to control Miriam, her older brother, Aaron, and her father look to find her a husband, something Miriam has never been interested in—until Caleb, a young, handsome man, confesses his feelings for her and asks her father for her hand in marriage.

When Libya advances on Egypt, Moses and Miriam are suddenly thrown together as the Egyptian royals and soldiers flee. Hebrew slaves are forced to defend the kingdom, and Miriam and Caleb are enlisted under Moses’s direction. Moses quickly sees there is more to this downtrodden people than what he’s been taught. When he witnesses the atrocities enacted against the slaves, he realizes he must leave—he must find out who he really is.

A gripping account of the events that lead to Moses’s flight into the wilderness, The Moses Chronicles: Bondage will take you back to a rich period of history replete with scandal, strife, love, and hope as God prepares a prophet to lead His chosen people.

Heather B. Moore knows how to take stories from the Bible and make them come alive. When I first picked up Bondage, I admit I was a bit intimidated by the list of characters in the first pages, and all of the Egyptian, Hebrew names.  However, Ms. Moore did an excellent job with building each character in a way that you become connected and familiar with them. There is suspense and action, with the majority of the story focusing on relationships. Volume One taught us about Moses’ time and place as well as the women who were influential in his life.  This is a book that will keep you up reading late into the night! The Moses Chronicles: Bondage is rich, well-written historical fiction at its best with messages about faith, prejudice and loyalty.

Content is for adults –violence, seduction, talk of harems and threat of assault.

Heather B. Moore is the two-time Best of State and two-time Whitney Award winner for her historical fiction, the most recent being Esther the Queen. She is also the author of the nonfiction inspirational book Women of the Book of Mormon and the coauthor of Christ’s Gifts to Women with Angela Eschler. Heather is a columnist for Meridian Magazine on LDS topics.