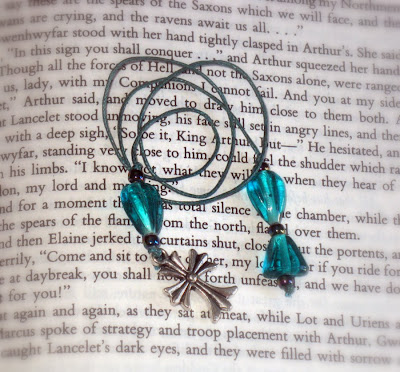 Today’s bookish giveaway is inspired by the book “Devil’s Kiss” by Sarwat Chadda and is brough to you by Bad Candy Studios –the brainchild of three creative friends–Heather, Maureen, and Amanda–who wanted an excuse to get together and make things more often. We specialize in handmade note cards, including invitations and announcements, though we’ve also been known to dabble in everything from prints to jewelry to thumb tacks.

If you like what you see here, you can also check out our other non-snarky stationery at http://papercupcakestudios.etsy.com/.

To Enter To Win: leave your name and email address below
Additional entries
+2 go to Etsy and heart their shop http://www.etsy.com/shop/badcandystudios
+3 tweet this contest-leave the link
+5 post it on your blog or facebook- leave the link
+5 add our button to your blog
+3 follow us on twitter @FireIcePhotos
+3 become a fan of Fire and Ice on Facebook

Add your entries up and leave the total in your comment

Contest ends on April 5, 2010 and is open internationally. Please email us of you cannot comment below. Thanks and Good Luck! 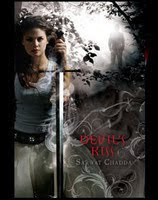 Summary from Goodreads :As the youngest and only female member of the Knights Templar, Bilquis SanGreal grew up knowing she wasn’t normal. Instead of hanging out at the mall or going on dates, she spends her time training as a soldier in her order’s ancient battle against the Unholy.

Billi’s cloistered life is blasted apart when her childhood friend, Kay, returns from Jerusalem, gorgeous and with a dangerous chip on his shoulder. He’s ready to reclaim his place in Billi’s life, but she’s met someone new: amber-eyed Michael, who seems to understand her like no one else, effortlessly claiming a stake in her heart.

But the Templars are called to duty before Billi can enjoy the pleasant new twist to her life. One of the order’s ancient enemies has resurfaced, searching for a treasure that the Templars have protected for hundreds of years — a cursed mirror powerful enough to kill all of London’s firstborn. To save her city from catastrophe, Billi will have to put her heart aside and make sacrifices greater than any of the Templars could have imagined.

Sarwat Chadda does an amazing job of weaving historical content, religion and myth into this story of Billi Sangreal’s effort to accept her life as a Templar. I found his writing to be rich and highly intelligent. Chadda makes the vampire, ghuls, werewolves, warriors and fallen angels his own. “The Dead should not linger” is what he told me…

Billi is a strong willed protagonist with a mind of her own who become attracted to a mysterious man who comes to her rescue and helps save her life. But also enter in to the equation Kay, her life long friend w ho is an eternal optimist and has powers he yet will realize over the occult. The classic pull between good and evil with a twist of romance and history made this an awesome read. I think you’ll find Devil’s Kiss to be creepy, yet classical at the same time. Chadda announced his second novel, the Dark Goddess “comes out July (UK) but Jan (US) and the versions will be subtly different.” We can’t wait! Follow him on twitter @sarwatchadda and check out his website http://www.sarwatchadda.com/

Here’s the trailer for Devil’s Kiss: http://www.youtube.com/watch?v=AJ0ecooQGV4 and a photo gallery I made on Flickr with images that reminded me of the book and taught me about the Knights Templar

Win a tatted templar cross in the post below and stay tuned for more Devil’s Kiss inspired giveaways! 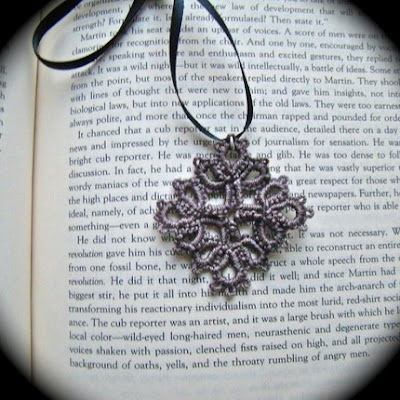 Today’s giveaway is by etsy seller TotusMel. I found her after reading the book “Devil’s Kiss” by Sarwat Chadda. Searching for Kinights Templar items I discovered her super steam punky necklaces…
Hi, my name is Pamela Quevedo. I’m a stay at home mom to 2 wonderful little girls. I’ve been creating stuff since I can remember & I’ve never stopped teaching myself new things. While this site focuses mostly on my needle tatting, I’m also known to cross stitch, knit, crochet, sew, bead, play with perler beads, tear apart motherboards for interesting parts & I even draw on occasion.
My goal with my tatting is to not only to make it wearable, but interesting & dare I say hip. I’m always interested in feedback on my styles & color choices.
I can also be contacted at

Proud member of Etsy Steam. Search for; SteamTeam .Description of the pendant
This pendant began as the center of a vintage pattern. Hung by a corner, it reminds me a bit of a Templar cross.

To Enter to win one hand tatted necklace:
leave your name and email address below
Additional entries
+2 go to her shop and comment on your favorite item by pasting the link
+2 go to Etsy and heart her shop http://www.etsy.com/shop/TotusMel
+3 tweet this contest-leave the link
+5 post it on your blog or facebook- leave the link
+5 add our button to your blog
+3 follow both of us on twitter @FireIcePhotos and @TotusMel
+3 follow our blog or hers (see links above)
+3 become a fan of Fire and Ice or TotusMelTats
Add your entries up and leave the total in your comment

Contest ends on March 25th, 2010 and is open internationally. Please email us of you cannot comment below. Thanks and Good Luck!