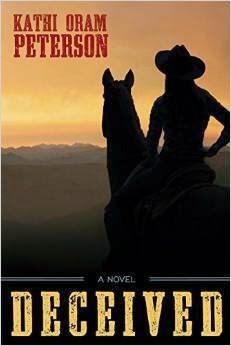 A storm rages outside the unassuming Los Angeles house, while within, something sinister lurks. A murderer stalks his victim, unaware of a witness to the horrific crime: awakened from a deep, drug-induced slumber, Tara Kelly hears voices in the next room. Struggling to focus through her sleep medication, the young woman helplessly observes her aunt's murder. Now she's a loose end the killer cannot ignore . . .

A family friend helps Tara as she does the only thing she can: disappear. Fleeing to the security of a remote Idaho ranch, Tara finds herself under the guard of handsome rancher Joseph White Eagle. Her unwitting protector takes his role seriously, going as far as claiming that Tara is his fiancée. But even as their relationship deepens, Joseph struggles to see past Tara's similarities to his late wife. When a series of accidents threatens Tara's life, it becomes clear that her attempt to out run danger has been in vain. The killer will stop at nothing to find her, and Joseph will do anything to protect her even if it means unraveling secrets that will have devastating consequences for them both.

Suspense is typically not my cup of tea, but I wanted to give Deceived a chance because the author is LDS and I knew it would be clean. This book starts off with a bang! Tara is taking refuge in her aunt’s home and slightly groggy from sleeping medication, she awakens to a horrible scene. A fight,a gun, and no memories of the murder she witnesses. She is whisked off to Idaho for protection. Joseph, a widowed rancher has been given the charge to protect her, but strange things are happening on his land. Soon both Tara and Joseph appear to be in real danger.

With plot twists, suspense, Irish folklore and clean romance, Deceived moves along swiftly. I had a bit of trouble believing and piecing together how everything unfolds, but it’s an enjoyable read! There are some elements of religion and faith discussed, but it’s not overbearing. If you’re a fan of cowboys, mystery and action this one is for you!