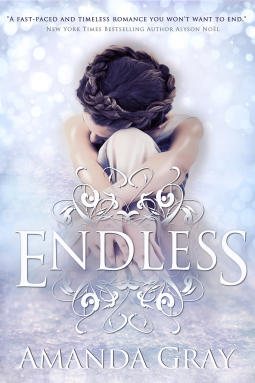 Jenny Kramer knows she isn't normal. After all, not everybody can see the past lives of people around them.

When she befriends Ben Daulton, resident new boy, the pair stumble on an old music box with instructions for “mesmerization” and discover they may have more in common than they thought. Like a past life.

Using the instructions in the music box, Ben and Jenny share a dream that transports them to Romanov Russia and leads them to believe they have been there together before. But they weren't alone. Nikolai, the mysterious young man Jenny has been seeing in her own dreams was there, too. When Nikolai appears next door, Jenny is forced to acknowledge that he has travelled through time and space to find her. Doing so means he has defied the laws of time, and the Order, an ominous organization tasked with keeping people in the correct time, is determined to send him back.

The first thing that drew me to Endless was the cover. Heaven! The beginning chapter was a little rocky for me as the character’s lines and choppy writing style didn’t connect well, but delving into the rest of the story was smooth and easy. This is a book rich with detail. If you were a fan of Dreaming Anastasia by Joy Preble, it’s another YA title to add to your shelves featuring the Romanov family of Russia.

Story in a Nutshell

Jenny is an artist who can feel and see people’s past by touching them so she remains recluse and immerses herself in her art. But suddenly a man she doesn’t know shows up in all of her paintings and begins to appear in her dreams. She has one true friend at the bookstore where they both work, but is suspicious of people. During her”spare time” works alongside her father as he renovates old homes. They meet Ben and his mother on one such job and Ben is just as standoffish.What Jessie and Ben find one day in the attic pulls both teens into a time travel mystery and a dangerous race for time in the present.

I always like books with multi- layered elements of history. Abandoned homes that come to life, antiques with meaning in the present day, family history with links to the past

I loved that both the main characters parents were involved even in a  minute way in the story line. These teens have angst, they have independence– but they also have parents who check in and care.

Jenny is navigating what it means to trust and open up to people. She finds true friendship and others that stand by her as she lets down walls.

The flashbacks and  imagery of the Romanov family living in their own home as an exile and sewing their jewels into their clothing was so vivid and makes the bits of history real.

The pace clipped along without stalling which makes Endless interesting and easy to read.

What I Struggled With

I didn’t fall in love with main characters Jenny and Nikolai as they found each other in time. It seemed to be a pre destined romance but not as convincing or emotionally moving to the reader.

Ben, the other main teen character seemed to drop out of the story when Nikolai appears. I wanted to know more about his role in the past visions and what he is seeing and feeling.   Would  love to see a second novel or novella form his point of view in the future.

The mystical elements of ouija boards and mesmirization were weaved in to connect past and present, but along with the men in green robes that looked like monks, they just didn’t mesh with my vision of time travel and Russian history.

Amanda Gray believes in magic and fantasy and possibilities. She is a team of two bestselling authors who live only miles apart but have never met in person. They talk on the phone and are the best of friends and between them have written more than a dozen novels and novellas and have had their work appear on television.