A Place for Miss Snow

Miss Diana Snow is everything a British chaperone should be—she finds satisfaction in order and depends wholly upon the rules of decorum as she negotiates the isle of Greece with her young charge. But Miss Snow's prim and proper exterior masks a disquieting past: orphaned and alone in the world, she has only her stiff upper lip to rely on. When a brief encounter with a handsome stranger challenges her rules of propriety, Diana is unwittingly drawn into an adventure that will turn her ordered world upside down.

Alexandros Metaxas is a Greek spy working to recruit individuals to the cause of revolution. His mission seems to be going perfectly until he encounters Diana Snow, a captivating—if slightly cold—beauty. When their paths cross again, the ill-fated reunion threatens all Alex has been fighting for. But more importantly, it places Diana's life in jeopardy. There is only one way to save her: they must put themselves at the mercy of the most powerful pirate family in the Mediterranean. Soon, Diana is plunged into a fantastic world of gypsy curses, blood feuds, and unexpected romance. But when a bitter vendetta places her in mortal danger, will she have the courage to fight for life and love? 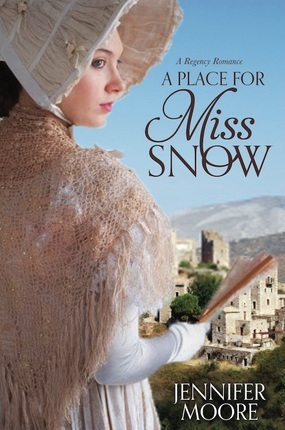 Prepare yourself to be full immersed in Grecian culture, setting , history and politics during the Regency period. A deviation from the English society, A Place For Miss Snow follows an English orphan serving as a companion to an officer’s daughter. Kidnapped and knife point and carried away by scoundrels, Miss Snow is implicated during simple act of returning a man’s gloves. There is slow romance between this man, Alex,  and Miss Snow which takes a second seat to the history.

As a reader, so much in this book was entirely new, it might have been helpful to have an introduction or author’s note explaining the background or a glossary of names and Greek terms. Ms. Moore always does significant research behind her novels, tis one could easily be used in the High School classroom as there is little violence and no questionable content. Thank you for the diversion for a day to a place much warmer and more colorful.