This book may be unsuitable for people under 17 years of age due to its use of sexual content, drug and alcohol use, and/or violence. 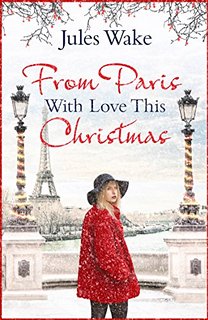 From Paris With Love This Christmas

The gorgeous, Christmassy feel-good follow up to the Summer best-seller ‘From Italy With Love’.

That’s what Paris socialite Siena Browne-Martin keeps telling herself. She’ll stay with her estranged sister, Laurie, just until Christmas. Running away from the chateaux to escape her hot-tempered fiancé Yves’s wrath, may not have been the most rational decision. But Laurie had always said that Siena had a room at the cottage and right now she really needed it.

But arriving at the airport to be greeted by the grumpiest, most brooding—and dangerously gorgeous—man Siena has ever met, is not what she expected. And learning that Laurie isn’t living at the cottage anymore is even more of a surprise. Now Siena is stuck rooming with sullen Jason Landon, which is definitely not in the plan! Especially when his protective nature and quiet compassion threatens to ignite something in Siena that she never knew existed…

For Jason, Christmas can’t come soon enough. This pampered Parisian princess is the last person he wants to share his house with—he knows the destruction high-maintenance gold-diggers can cause and he’s never going there again. But Jason soon realises that there’s more to his unexpected house guest than meets the eye and suddenly Siena staying just until Christmas doesn’t seem like long enough…

This Christmas, fly to Paris with Siena and Jason and experience the magic of the holiday season in From Paris With Love This Christmas by dazzling contemporary romance author Jules Wake!

Siena is a rich up and coming Parisien who hasn’t seen her sister in years. She’s running from an uncertain future and finds herself being picked up at the airport by the most grumpy driver she’s ever met. Only, he’s not just a driver, he’s her housemate. What starts off as a trip to escape turns into an opportunity to start over in England. Siena needs to find a job, pursue her dreams of being a fashion designer and mend relationships long neglected.

The most stunning parts of the book are set in Paris. I wish more of England could have been fleshed out in the same manner. This is an adult read as there is a lot of swearing. In fact, so much so that it turned me off. I enjoyed the character arc both Siena and Jason go through and the message of escaping abuse for a more healthy relationship. I also loved the richness of each friend she encounters and the resolution.  Thanks to Netgalley and HarperImpulse for the review copy!

Jules’ earliest known declaration that she planned to be a writer came at the age of ten. Unfortunately the urge to actually get her backside into gear and write a book didn’t revisit her for quite some time after that.

After a twenty year career in the glamorous world of PR, working on luxury brands, she switched profession to give her more time and energy to write. By day she works in a junior school and by night writes romantic comedy and happy ever after stories which are the sort of books she’s always enjoyed reading.