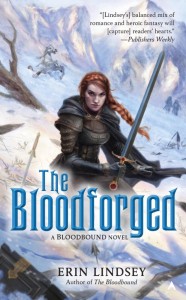 As war between Alden and Oridia intensifies, King Erik must defend his kingdom from treachery and enemies on all sides—but the greatest danger lurks closer to home…

When the war began, Lady Alix Black played a minor role, scouting at the edge of the king’s retinue in relative anonymity. Though she’s once again facing an attacking Oridian force determined to destroy all she holds dear, she is now bodyguard to the king and wife to the prince.

Still, she is unprepared for what the revival of the war will mean. Erik is willing to take drastic measures to defend his domain, even if it means sending Prince Liam into a deadly web of intrigue and traveling into the perilous wild lands of Harram himself.

Only the biggest threat to the kingdom might be one that neither Alix nor Erik could have imagined, or prepared for…

Praise for the Book

“Action and intrigue and flawed but likeable characters who, in complex political/personal situations, make hard decisions and stand by them.”—Tanya Huff, national bestselling author of The Future Falls

“Lindsey does a fine job of building tension…I genuinely liked the characters and want to read more about them.”—SFFWorld

“All right, let’s get this over with.”
The first speaker’s residence wasn’t far. Everyone who was anyone in Onnan City, it seemed, lived in the Ambassador District. The carriage juddered along the cobbled streets for less than a quarter of an hour before coming to a halt, the thick velvet curtains drawn aside to reveal a handsome gravel drive edged with cedars. A gloved hand reached inside; Liam watched in amusement as Rona took it, lifting the hem of her dress and letting herself be led gingerly from the carriage as if she were some fragile debutante. It would have been hard to reconcile this version of Rona with the knight he’d seen slashing her way through enemy ranks if he hadn’t seen his wife undergo a similar transformation on more than one occasion.
They were ushered into an elegant courtyard of arched alcoves and carved wood doors, a theme that was echoed on the second and third levels by ribbed butterfly windows that gave onto vine-draped terraces. Roses climbed the pillars, and a trio of pear trees thrust up between the flagstones, white petals shivering in the breeze. In the centre of it all, moonlight sparkled off the watery plumes of a fountain in the shape of a leaping fish. People were scattered about the courtyard in close-knit clusters, laughing softly and sipping at something that glittered like the fountain. Thus far, no one had noticed the newcomers.
“Beautiful,” Rona murmured. When Liam didn’t reply, she glanced over. “Commander? Something wrong?”
“What? Oh, no thanks, I’m fine. It’s just that this reminds me a little of a dream I had recently.” More than a little, actually, but he had no desire to recount his nightmares to Rona Brown. “So”—he glanced around—“what do we do now?”
“We mingle.” Rona paused, gazing up at him expectantly.
“Oh, right.” Liam offered an arm. “Sorry. A bit flustered, is all.”
“Don’t be. Or at least, don’t look it.”
“Right,” Liam said again, feeling foolish. He took a deep breath and escorted Rona into the courtyard.
Heads started turning straightaway. This, too, was like the dream, and Liam couldn’t help squirming a little. You’re being stupid, he told himself. For one thing, this wasn’t Erik’s court. Nobody here cared that he was a bastard; if anything, it was a point in his favour, at least according to Alix. On top of which, the looks he was getting weren’t hostile. On the contrary, the beautiful people in the courtyard were smiling at him diffidently, as though hoping he might bestow a little attention on them. 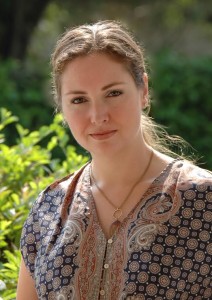 Erin Lindsey is on a quest to write the perfect summer vacation novel, with just the right blend of action, heartbreak, and triumph. The Bloodbound series is her first effort. She lives in Brooklyn, NY with her husband a pair of half-domesticated cats. 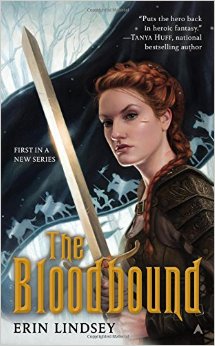 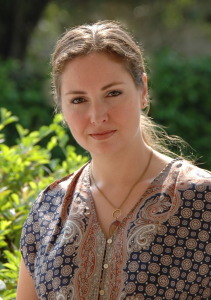