Posts Tagged: keys to the repository 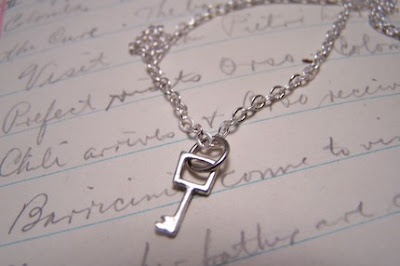 Today’s Etsy shop giveaway is a silver key necklace for the book “Keys to the Repository” by Melissa De la Cruz, donated by Emilina Ballerina! My name is Susan and I am the proud mother of two teenagers. I have always enjoyed working with my hands and the creative process. I am inspired by quotes, feelings, memories, beautiful scenery, friendship, and motherhood… I hope something you see here will touch you or strike a chord within you. Namaste

All jewelry comes in a complimentary gift box with a raffia bow and lucky Chinese coin.

Necklace Description: My heart had been closed until I met you. I never thought I could love again but now I am ready to give you all that I am. Please accept this key to my heart and know that you are the only one that holds it from now until forever. The tiniest key ~ simple and delicate on a silver chain , 18″L

To Enter To Win: leave your name and email address below.
+1 for hearting her shop on Etsy http://www.etsy.com/shop/EmilinaBallerina
+1 for becoming a Fire and Ice fan on facebook
+5 for posting this contest on your blog, leave the link
+2 for blog followers
+1 for each retweet @FireIcePhotos
+3 for each dollar donated to Chile relief efforts via PayPal
+1 for telling us your favorite scene in the Blue Bloods series
Contest ends August 27, 2010 and is open internationally 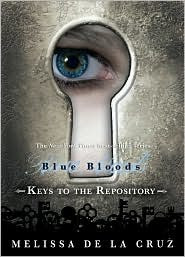 Lavish parties. Passionate meetings in the night. Bone-chilling murders. Midterms. The day-to-day life of Schuyler Van Alen and her Blue Bloods friends (and enemies) is never boring. But there’s oh-so-much more to know about these beautiful and powerful teens. Below the streets of Manhattan, within the walls of the Repository, exists a wealth of revealing information about the vampire elite that dates back before the Mayflower. In a series of short stories, journal entries, and never-before-seen letters, New York Times bestselling author Melissa de la Cruz gives her hungry fans the keys to the Repository and an even more in-depth look into the secret world of the Blue Bloods. Won’t you come inside?

I enjoy reading Melissa’s blue blood series and am a fan of Shulyer and Jack, however this book is a side step off the pure story telling we are used to. Keys to the repository is an anthology of family history, maps and secret files compiled in the Blue Bloods library. Many of the files are dry reading and much of is is a repeat from the previous novels. It is a great book of reference if you are just reading the series for the first time and wan tot know who is who. Melissa is obviously a history buff who has thought through her characters carefully and charts their lines through time. I give her kudos for being so intelligent and thorough. Beyond the library file chapters there are however, are some secret treasures that made it a worthwhile read.

Schulyer and Jack’s chapters on their meetings in the apartment in New York are a neat look into what they were thinking and feeling. There is also a chapter called wolf pact which introduces continuing story of Bliss Llewellyn and an excerpt from the first book in new a series about wolves. It is more graphic that anything Melissa has written with violence, but interesting for those wolf girls and guys out there.

My favorite chapter was Shelter Island which is Dylan’s story between the books Blue Bloods and Masquerade. In my mind this chapter could merit a whole book of its own. Set in a secluded island setting it was mysterious and gripping. And save the best for last…the final two chapters are the First in the book “Misguided Angel”
which will be released in October. THIS is what I am waiting for. A little sneak peek into the new life of Shulyer and Jack. The final chapters are a taste of the future and a wonderful teaser for faithful readers of the BB series. All in all I give it three stars and can’t wait until Fall! Read more about Melissa and her Blue Blood series at http://bluebloodsbooks.com/