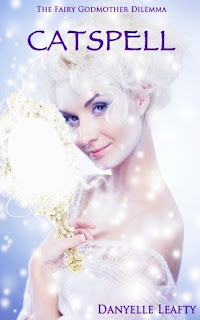 The Fairy Godmother Dilemma: Catspell
by Danyelle Leafty
Ebook
Publication Date: October 22, 2011
Book Source: author
3.5 stars
Book Summary from Goodreads: Sixteen-year-old Breena never thought anything could be worse than being forced to leave the faerie realm. Then she got stuck with a fairy godmother. But if she has to choose between the two, she’d leave the Faerie Realm over getting bossed about by a faerie with a pointed stick any day. Unfortunately, her attempt to evade her fairy godmother gives her growing pains in the form of fur, whiskers, and a tail.

Turning into a cat is the least of her worries, though. The potion wasn’t meant to bring out her inner feline, it was meant to put her to sleep. Forever. If Breena wants to make it to her Happily Ever After, she’ll have to accept that sometimes a fairy godmother really does come in handy, after all.
Cathy’s Review: Nerissa is a fairy godmother who feels as though she needs a break. The fairy queen has just had her taking care of one Damsel in Distress (DID) and now she’s sent her flaming lizard to tell her of another, she’s also got a terrible cold that makes her even more irritated at the crazy flaming lizard! But she can’t really tell the fairy queen no, so she’ll be taking on her newest DID right away. Enter Breena, she’s a teenage human princess who’s been raised by fairies. She really wants nothing to do with having a fairy godmother, she’d far rather run away, but Nerissa has told her that they now have a bond that makes it so Nerissa always knows just where Breena is. Through some crazy events and really no fault of her own, Breena is turned into a small white cat. Uncertain of just how she got that way, she can’t explain it to Nerissa, and Nerissa can’t change her back. So Nerissa whisks her away to a castle, a castle full of wind servants that she promptly turns into talking cats and leaves Breena in their care, so that she can plan for Breena’s happily ever after, but first Breena must figure out what her Happily Ever After will be! This book has a fairy tale quality with all of the talking animals and fairy godmother, not to mention the dragon. I liked the story, but found some of the characters and magic to be a bit confusing. I do think this story could make a great series, maybe with some extra explanations about what some of the magical characters are supposed to be and be able to do.
Content: Clean, nothing offensive

About the Author: Danyelle Leafty doesn’t exactly believe in fairies, but her skepticism hasn’t stopped an odd assortment of imaginary people from bullying her into writing their stories. This is the place in which she details her journey, talks about frogs, and harnesses the occasional dragon. When she isn’t rescuing dragons from evil princes, she blogs for QueryTracker.Net and is an editor for Underneath the Juniper Tree–an online kidlit magazine.
Find out more about author Danyelle Leafty: Goodreads/ Website/ Blog
Read Castpell now for 3.99