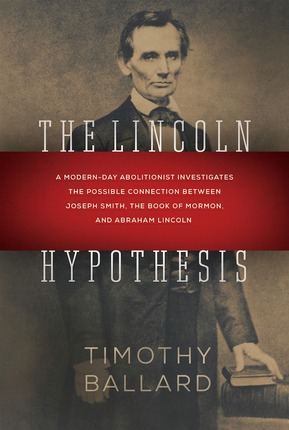 Abraham Lincoln became the sixteenth US president during a very dark time in America's history. Author Timothy Ballard explores the crucial role that President Lincoln played to bring this nation closer to heaven. Readers will see Lincoln as a man inspired of God who invoked a covenant relationship between America and its maker—not unlike the national covenants invoked by righteous leaders in the Book of Mormon. In addition, The Lincoln Hypothesis reveals documented evidence that Abraham Lincoln did, in fact, check out the Book of Mormon as he struggled with making some of the most critical decisions of his presidency. Did he read it? Did it influence him? Was the Book of Mormon a key factor in Lincoln's success and the healing of a nation?

The author states, "As you read, you will, like a prosecutor reviewing a case, or like a jury determining a verdict, identify valuable pieces of evidence that can be fully substantiated. You will also identify pieces of evidence that cannot. I ask you to consider all the evidence and weight it accordingly. Through this study, many questions regarding the interplay between the restored gospel and the Civil War will be answered. New questions may emerge that will not be so easily answered. Either way, in the end you will find yourself on a most exhilarating investigative journey."

The American tears that were shed on Easter Sunday in 1865 were immeasurable! During the week leading up to the hallowed day, Abraham Lincoln’s secretary of state, William H. Seward, had been bedridden due to a tragic carriage accident that had almost claimed his life. But that tragedy was severely compounded by the darkness and evil that attacked his own home two days before Easter Sunday. The attack was on Good Friday. The world would never forget that day. Not ever.

As Seward awoke from a state of semiconsciousness that Sunday morning, he could smell blood. He could taste blood. He glanced into a small mirror by his bed, only to jerk away from the awful sight of a man he did not even recognize. He wondered who had done this to his face and neck. He knew he would never fully recover.

As use of his faculties slowly began to return, memories of the dreadful scene that had played out less than forty hours earlier flashed before his eyes. He could still hear the echoed scream of his daughter Fanny as she was knocked to the ground by the vicious assailant. She had tried to defend her father against the demon. And his son Fred! His poor Fred! When he had tried to protect his father, that murderous hand had crushed his skull with the butt of a gun. He was left near death on the stairway outside his father’s bedchamber. By some providential occurrence, the gun had malfunctioned when the assailant had first tried to put a bullet through Fred’s head. Only that had saved his life. But his pain was not spared. Seward could still hear his anguish. He could still hear his wife scream in agony as she hovered over Fred’s broken body.

And the knife. The secretary of state could still see it coming down over his face and neck, cutting through his flesh.

Complete darkness and misery. On that Easter Sunday, Seward’s own pain was nothing compared to what he felt for Fred, who was still near death, or for his dear wife, Frances, whose frail constitution could not endure the tragedy. She would die shortly thereafter as a result of it all. But there was something else consuming his soul. Some foreboding feeling . . .

Suddenly, instantly, he knew. He turned his aching head to his attendant and opened his mouth. All he could muster was a whisper-though in his mind it was a powerful and frightening proclamation: “The president is dead!” Seward’s startled attendant immediately “stammered and changed color as he tried to say nay.” The poor fellow did not want to be the bearer of news that might do his patient in. But Seward needed no confirmation. He knew at once that it had all been a conspiracy. The fiend who entered his quarters had had an accomplice-the president had been attacked simultaneously. They wanted them both dead. But the president had not been as lucky. Abraham Lincoln had been struck down on the very night that commemorates the murder of our Lord.

Seward gathered his emotions, then softly spoke his conclusion to his attendant: ?If he had been alive he would have been the first to call on me, but he has not been here, nor has he sent to know how I am.? His feelings at that very moment were later reported by his journalist friend Noah Brooks: William Seward then lay in silence, “the great tears coursing down his gashed cheeks, and the dreadful truth sinking into his mind

Of course Seward knew Lincoln would have called on him had he been alive. That was Lincoln. That was the magnanimous spirit who over the course of a few short years had become his best friend.

There was something almost appropriate about the day of this sad revelation—Easter Sunday. Twenty-eight years earlier, Seward?s sweet infant daughter, Cornelia, had been taken from him. Smallpox. After her funeral, Seward resumed his work, which at the time placed him far from home. It was a difficult time to be alone. He turned to God. Then he made the decision. On Easter Sunday, 1837, he was baptized a Christian. He wrote his wife of that day, explaining to her that during his baptismal service he thought continually of “our child-angel,” “that left her errand with my heart and straight returned to heaven.” He resolved on that Easter “to live more in the fear of and under the influence of love and gratitude to God” and to “gradually elevate and refine my motives of action

That earlier Easter day connects to this one because they both conjure up the memory of a man—Abraham Lincoln. Easter 1865 connects to Lincoln because it forever memorializes his sacrificial death. And Seward’s previous Easter experience with tragedy and humility, followed by conversion, God, and salvation, connects to Lincoln because it was a foreshadowing of Lincoln’s own experience. In watching Lincoln pass through a similar experience over the last four years of his life (and passing through part of it with him), Seward bonded with Lincoln in ways he never could have imagined. It was part of what made them friends. But Lincoln’s experience was much more profound than anything Seward had endured. For Lincoln’s experience, I believe, led to the salvation of an entire nation—perhaps even the salvation of the whole world! Yes, though his story leads us through dark and dreary places (like those just recalled), it is in fact a happy one. In some ways, as you shall see, it is the story of Easter, which is why perhaps the timing of Abraham’s death—like the timing of Seward’s baptism—was somehow foreordained. The Master is indeed at the center of this story. And it ends in glory!

This glory especially applies to Latter-day Saints, who have a particularly deep connection to Abraham—perhaps deeper than they ever imagined. For his sacrifice directly led to that thing which is of greatest import. Indeed, his life and death represent a crowning achievement in the building of the kingdom of God and in the development of the Restoration of the gospel.