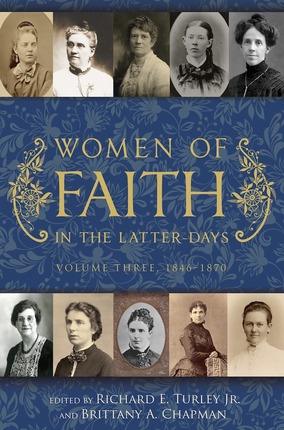 Women of Faith in Latter-Days: Volume 3

This groundbreaking series tells the stories of women in the history of The Church of Jesus Christ of Latter-day Saints whose lives of faith and dedication deserve emulation. Each chapter recounts a woman's trials, triumphs, and testimony, often in her own words.

Volume 3 features women born between 1846 and 1870 and includes well-known women and other publicly unknown. Their lifespans range from the era of the Mormon pioneers to the beginnings of the space age. Al these women knew pioneer life firsthand. Many also experienced the gradual transition to modern life and the expansion of the Church to far-flung parts of the globe.

The faith these women exhibited as they rejoiced in blessings and dealt with struggles provides a model for us in facing our own challenges as we strive to build lives of faith today.

Additional biographies of Latter-day Saint women of faith born between 1846 and 1870 are available in the eBook edition of this volume.

Wow! I had no idea Utah had such a rich early history of women holding political office, being doctors, and fulfilling prominent roles in society. This being the first volume I’ve read in the Women of Faith series, I jumped in at volume three, and at a time period I really love. Utah was just on the cusp of gaining statehood and the women activists were fighting for the right to vote and hold office. Women of religious conviction with large families and often with little ones at home who worked in their community post offices and stores, and traveled to the East to obtain higher education. For instance, did you know “in 1896, Martha Hughes Cannon ran as a Democrat” in Utah for one of the open Senate seats? One of her opponents was her Republican husband. Martha won and become the first female Senator in the United States of America. She served two terms in the Utah state legislature. Utah also had the first woman to serve as a Chaplain for the Senate, Maud Mary Babcock.

Between 1911-1913, five Utah women served on the first all-woman town council in Kanab with Mary Elizabeth Woolley Chamberlain as mayor. Women of Faith vol. 3 shares many stories like these, three of just how strong, determined and active LDS women were. I was fascinated by their desire to get their degrees, to serve in their homes an in their government. Other stories include, a sister in Japan who became like a mother to the missionaries in Tokyo, and a Maori sister who came to live in Utah from New Zealand. If you are looking for historical examples, journal entries, photos and testimony of hte early sister Saints, this is a book you will want to buy to have on your shelves. My testimony was bolstered, my faith encouraged and I came away wanting to pursue my dreams while maintaining roots at home. I highly recommend Women of Faith in the Latter Days volume 3, and I will be picking up the rest of the series!

RICHARD E. TURLEY, JR., Assistant Church Historian and Recorder for The Church of Jesus Christ of Latter-day Saints, is the chairman of the editorial board for The Joseph Smith Papers series. He is the author or co-author of several books, including How We Got the Book of Mormon, with William W. Slaughter; Massacre at Mountain Meadows, with Ronald W. Walker and Glen M. Leonard; and Stories from the Life of Joseph Smith, with Lael Littke. In addition, he is the coeditor of the series Women of Faith in the Latter Days, with Brittany A. Chapman. He and his wife, Shirley, live in Taylorsville, Utah.

Brittany A. Chapman is a historian in the Church History Department of The Church of Jesus Christ of Latter-day Saints. Learn more at Deseret Book.