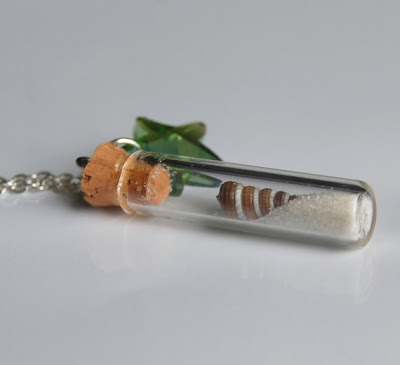 Our Etsy giveaway is inspired by the book Sleepless, by Cyn Balog… a sands of time necklace donated by Sol E Mar designs. HI! My name is Wendy Lee Carvalho. I am a graphic designer full time, but love to work on jewelry and crafts whenever I can. All items listed in my shop are hand made. I can custom make you an item if you would like. If there is something you see that you like but would love to have it in a different color, shape, size, then just shoot me an email and I will try my hardest to see if I can get you what you need. Feel free to email me if you have any questions or just want to let me know what you think of my shop. I also do freelance graphic design on the side, if you need business cards, letter head, logos, banner artwork or any kind of graphics just let me know!
description: Sand Of Time Tiny Glass Bottle Necklace
Who said you can’t have the beach with you all year round? These tiny little bottles are the perfect way to remind you of the summer. Filled with sand, a lonely shell and adorned with a iridescent green starfish crystal. Perfect for any casual affair. Cork is glued down so it will not open. Strung on your choice of an 18″ silver plated ball chain, or simple silver plated link chain.

To Enter to Win: Leave a comment below
additional entries
+2 heart her shop on Etsy http://www.etsy.com/shop/wendyc0603
+1 for each retweet @fireicephotos
+1 for commenting on our review of Sleepless
+5 post this contest on your blog or facebook, leave the link
+1 Visit her facebook page and become a fan http://www.facebook.com/pages/SolEMar-Designs/127344203952393

Total your entries and leave us the total. 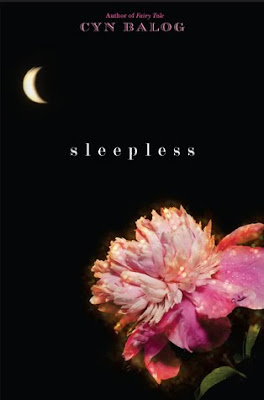 Eron DeMarchelle isn’t supposed to feel this connection. He is a Sandman, a supernatural being whose purpose is to seduce his human charges to sleep. Though he can communicate with his charges in their dreams, he isn’t encouraged to do so. After all, becoming too involved in one human’s life could prevent him from helping others get their needed rest.

But he can’t deny that he feels something for Julia, a lonely girl with fiery red hair and sad dreams. Just weeks ago, her boyfriend died in a car accident, and Eron can tell that she feels more alone than ever. Eron was human once too, many years ago, and he remembers how it felt to lose the one he loved. In the past, Eron has broken rules to protect Julia, but now, when she seems to need him more than ever, he can’t reach her. Eron’s time as a Sandman is coming to a close, and his replacement doesn’t seem to care about his charges. Worse, Julia is facing dangers she doesn’t recognize, and Eron, as he transitions back to being human, may be the only one who can save her….

Even once they’ve become human again, Sandmen are forbidden to communicate with their charges. But Eron knows he won’t be able to forget Julia. Will he risk everything for a chance to be with the girl he loves?

The premise of this book is the stuff modern day fairy tales are made of. A sandman who helps you drift off to sleep and then comes to life! The concept alone of a Sandman left me starry eyed after I finished reading. Cyn Balog has a way of putting imperfect teenage boys up against another love interest who is not of our of time or place and out of his element. This book had the same feel I got from her first, Fairy Tale. It accentuates the realities of teenage love…imperfect, coming of age and awkward characters doing their best to fit in, when are genuinely out of place. If you are looking for shiny happy people with embellished conversation this isn’t it. Nor is Sleepless a deep love story with richly developed characters. It reads more like a short story. But, I like Cyn’s style. It is quirky and she always throws in a few very unexpected twists.

Main character Julia has been dealt a bad hand with an incident in her childhood and now the loss of her boyfriend Griffin in a car accident. You would think she’d be sad or depressed so soon after his death, but she seems emotionally disconnected. Griffin, the deceased, is a world class jerk, as was his best friend Bret Anderson. I was bothered by their personalities and behavior. The result was a feeling of “not so sure” about any of the main characters or how they will react. Reading Sleepless feels like you are watching everyone as an outsider rather than becoming involved or sucked in.

I liked Eron and I loved the little snippets we get of his history as a sandman to Julia. However, the last of Sleepless is cut short. We never get a good taste of him or Julia after his full assimilation into becoming a human. He has potential as the absolute dream, so I was wishing for more. Overall, I enjoyed Sleepless but was hoping for magical.

Best things about the book: The beautiful cover, the scenes at the ice cream store where Julia works, and the shock of the first few times Julia meets Eron.