See How They Run

Inside every secret, there's a world of trouble. Get ready for the second book in this new series of global proportions--from master of intrigue, New York Times bestselling author Ally Carter.

Grace's past has come back to hunt her . . . and if she doesn't stop it, Grace isn't the only one who will get hurt. Because on Embassy Row, the countries of the world stand like dominoes, and one wrong move can make them all fall down.

The twists get twistier and the turns get even more shocking in the second thrilling installment of Embassy Row. 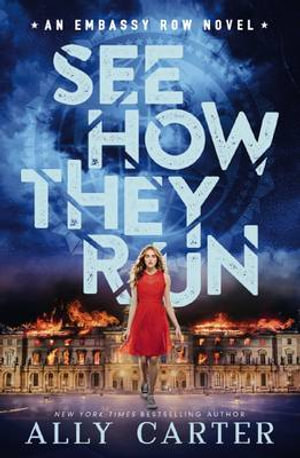 Grace is experiencing trauma from the death of her mother and can only remember bits and pieces of the event she witnessed. Her memories are muddled but all lead to a scar faced man who seems to now be following her. Spending time in Adria with her grandfather, a diplomat on Embassy Row, she’s afraid she is literally going mad. Her friends Noah and Alexi are there to hold things together when she unravels, but the anxiety and flashbacks are coming on stronger and more frequently. A plot driven, action packed story, See How They Run is riddled with past tradition, secret societies and murder. I’ve struggled a bit with this series because it is so much darker than anything else Ally has written. I put it down at one point, then came back after a break to finish it out.

You will definitely want to read book one to be able to decipher all that is going on. There are many layers to the story and the cliffhanger left me needing book three! I enjoyed the dynamic between Grace and her brother as well as the sparks. I would recommend the series for older teens as there is some violence and the tone is more dark than the Gallagher Girls or Heist Society series. There may also be some triggers for teens experiencing PTSD or anxiety. There is lots of history woven in to the backstory and I can’t wait to see how this all unfolds.

I was born and raised in Oklahoma. My mother was a teacher and my father a farmer and rancher. I have one older sister.

In high school, I was very active in a number of student organizations and graduated as co-valedictorian of my senior class. I then attended Oklahoma State University and Cornell University and worked for several years in the agricultural industry before writing full-time.

My first novel, Cheating at Solitaire (Berkley) was published in 2005. The following year I published the sequel to Solitaire, Learning to Play Gin. There are no more plans for future books in that series at this time.

I am also the author of Heist Society (February 2010) and its sequels Uncommon Criminals (June 2011), and Perfect Scoundrels (February 2013).

In January 2013 I published the cross-over novella Double-Crossed that features characters from both the Gallagher Girls and Heist Society. It is available for free at spiesandthieves.com and wherever ebooks are sold.

ALL FALL DOWN is the first book in my new Embassy Row series. It was published on January 20, 2015 and will launch a new three-book series with Scholastic.

My books have been published in more than twenty countries and have appeared on best-seller lists from the New York Times, USA Today, the Wall Street Journal, Barnes and Noble, IndieBound, and Bookscan. They have sold over two million copies in the United States.

I am one of the luckiest people in the world, and today, I’m able to do the job I wanted to do when I was a kid, and I am back living in Oklahoma.