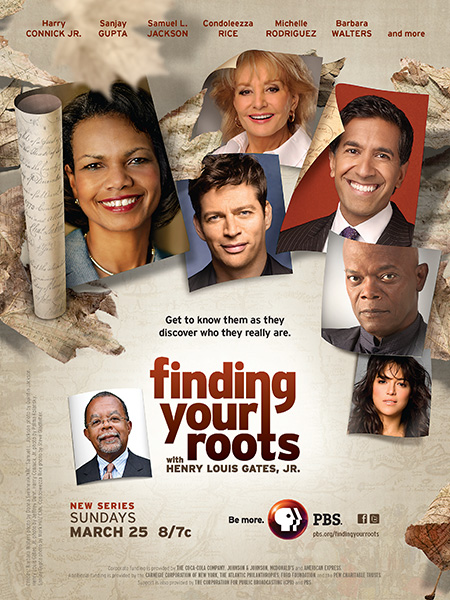 The basic drive to discover who we are and where we come from is at the core of this 10-part PBS series Finding Your Roots with Henry Louis Gates, Jr., the 12th series from Professor Gates. Continuing on the quest begun in his previous projects, African American Lives, African American Lives 2 and Faces of America, Gates finds new ways to, as he says, "get into the DNA of American culture." He takes viewers along for the journey with one celebrity pair bound together by an intimate, sometimes hidden link. And he treks through layers of ancestral history to uncover the secrets and surprises of their family trees.

Gates shares the findings with each guest and travels with them as they process what they've learned. He accompanies musician John Legend to a rock concert, goes backstage on Broadway with Samuel L. Jackson, joins Newark, New Jersey Mayor Cory Booker as he reveals the root-seeking results to his parents, and trails Dr. Sanjay Gupta and Geoffrey Canada to memorable family reunions.

The series searches through several branches of the American past, leaving audiences all the more curious about their own background and eager to unearth their own family roots.

I’ve spent the last two months watching episodes of Who Do You Think You Are?, so when I heard there was another genealogical series, this one put out by PBS, I wanted to give it a try. My family purchased the 3 disk series for me off of Amazon. I sat down to watch seasons 1 & 2 in marathon fashion. I enjoyed the narrator Henry Louis Gates, Jr. He is charming and well educated. However, about five episodes in, I started noticing a heavy handed slavery theme. It seems to me there is a definite political message over portrayed in each person’s family tree.

Gates wanted to track down any ancestor of each guest that owned slaves or participated in the civil war. At first, it was interesting, but then it got to be too much. Particularly political for me was the episode with Kyra Sedgwick and Kevin Bacon. On previous shows, many ordinary black citizens volunteered to have their ethnicity tested by 23and me. They were each asked to estimate in advance how African American, Native American or European they thought they really are. In this instance, the show took the 23andme DNA results folders into a High School classroom. Gates then proceeded to teach the students about the founding fathers and how they owned slaves.  I was not happy about the indoctrination and revisionist history theme, as well as having minors participate in discussing their DNA testing results on the spot in front of their peers at school. This was way over the top. I was watching the series with my family and as a mother, I would not want this happening in an every day classroom in America.

There is a strong message of “things are not what they seem” and color lines are blurry. Good message, but very persistent delivery. Overall, interesting look at paper trail and genetic genealogy, but I would not recommend watching the discs back to back. Watch them one at a time 🙂

My favorite episode thus far is one that is still available online. 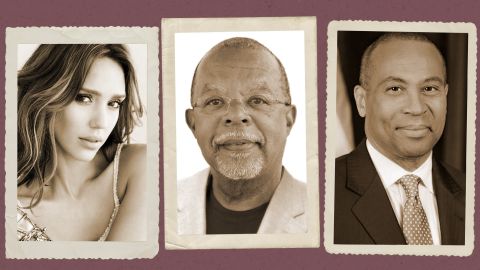 Decoding Our Past Through DNA… Secrets encoded in their genomes challenge these guests’ ideas about their families’ histories and their identities today. This episode features Jessica Alba, Anderson Cooper, Valerie Jarrett, Governor Deval Patrick and more.Premiered November 25, 2014. Go online and watch this one before it expires. I cried! Inspiring civil rights message and great discussion of unraveling family secrets through DNA testing.