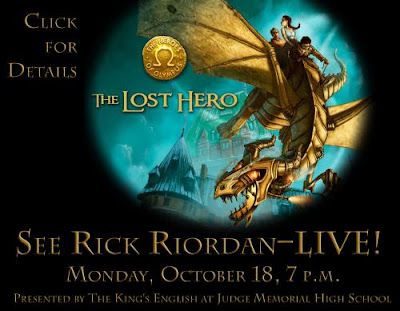 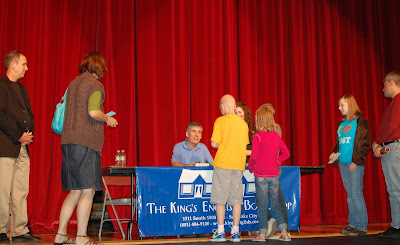 Last night The Kings English bookshop hosted a huge release party for Rick Riordan’s newest book The Lost Hero. It’s the first book in the middle grade Heroes of Olympus series, with the second scheduled to be released October 2011 (to read the first two chapters go here). Mr. Riordan plans on publishing a new book in one of his series every six months. The next book will be a new 39 Clues series to be published April 2010. 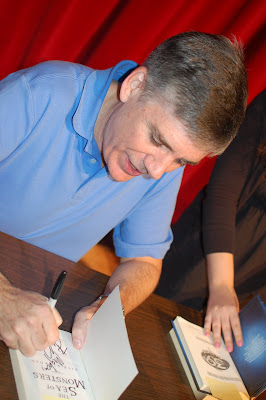 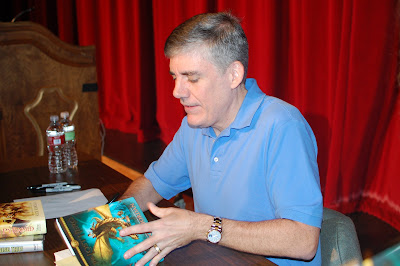 According to Publisher’s Weekly “Riordan told a group of media representatives during a conference call last week that he decided to write a second series about young demi-gods at Camp Half-Blood because he had so many more Greek and Roman myths he hadn’t been able to explore and twist into tales for modern-day readers in the first series. He also conceded that he wanted to “give Percy Jackson fans what they still want.” A “gods-eye-view” of the “worldwide party” for Heroes of Olympus at BookPeople. One book will be released each spring in his three-volume Kane Chronicles series for middle-grade readers, based on Egyptian mythology, and one book will be released each fall in the five-volume Heroes of Olympus series, which will mix Greek and Roman mythology. “

Mr. Riordan told fans last night that he retired from school teaching five years ago to write full-time and his characters are based on people he knows. One being a fifth grade math teacher he worked with, whom he later told. He took questions and answers from people in the crowd which filled the high school auditorium. Fire and Ice was fortunate enough to have a copy of The Lightening Thief signed for our blog followers. To enter to win fill out the form below.