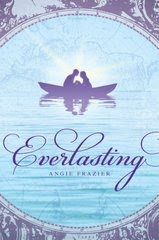 Sailing aboard her father’s trade ship is all seventeen-year-old Camille Rowen has ever wanted. But as a girl of society in 1855 San Francisco, her future is set: marry a man she doesn’t love, or condemn herself and her father to poverty.

On her final voyage before the wedding, the stormy arms of the Tasman Sea claim her father, and a terrible family secret is revealed. A secret intertwined with a fabled map, the mother Camille has long believed dead, and an ancient stone that wields a dangerous—and alluring—magic.

The only person Camille can depend on is Oscar, a handsome young sailor whom she is undeniably drawn to. Torn between trusting her instincts and keeping her promises to her father, Camille embarks on a perilous quest into the Australian wilderness to find the enchanted stone. As she and Oscar elude murderous bushrangers and unravel Camille’s father’s lies, they come closer to making the ultimate decision of who—and what—matters most.

Beautifully written and feverishly paced, Everlasting is an unforgettable journey of passion, secrecy, and adventure.

This is one of those timeless books that sets itself apart as a classic. Angie Frazier has a way of slowing time down to match the era and place it is set while the mystery and adventure will keep you captivated. It reminds me a bit of Crocodile Dundee with a dash of Somewhere in Time meets the movie Hook. Angie is a masterful story teller who weaves fantasy and romance.

Camille, the main heroine is a woman of the sea. raised on the decks of her fathers’ ships, taking in the salty air and building a strong friendship with her father’s right hand man, Oscar. She is engaged to be married to another man and about to give it all up to live in society. Camille should be happy, but can’t help questioning where are the sparks? As she embarks on her last voyage a twist of fate unravels family secrets, a letter and a curse. Her history is not what is seems and her heart will be challenged between loyalty or love. Will she respect her father’s wishes or make a way of her own?

Readers will fall for Oscar and become entranced with the tale of a treasure map and stone with the ability to save a life. I absolutely can not wait for the sequel! Four and a half stars to an awesome debut novel! Follow @angie_frazier on twitter and visit her website at http://angiefrazier.com/ Be sure to shcek out our Everlasting swag store on Etsy at LittleRedReads.

To enter to win an author signed bookmark donated by Angie, please leave your name and email address below. Contest ends September 16, 2010 and is open internationally.