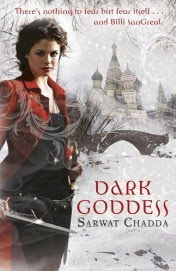 2 Responses to “Waiting on Wednesday- The Dark Goddess”