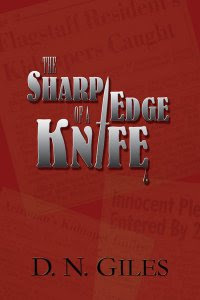 Product Description from Amazon
Most people would have panicked, sitting bound and gagged on a boulder in the middle of the desert as I was, but for some reason, I didn’t. A strange kind of reassurance washed over me from somewhere deep within. Whether it was peace that I’d go quickly, or comfort that I was being protected, I wasn’t sure. When Mel Petersen leaves for work on the morning of February 7, he has no idea what awaits him. A few miles from his house, Mel picks up a pair of young men who appear to be college students, hoping to prevent them from having to walk in the cold. What Mel doesn’t know is that the men are actually convicts on the run from the law who are desperate to get away by any means necessary. When one of his passengers holds a knife to Mel’s throat, he has no choice but to submit to the demands of the criminals. Mel hopes he has what it takes to talk his captors into letting him live so he can return to his wife and children, but fears they will kill him before he has the chance. Based on a true story, The Sharp Edge of a Knife follows Mel and his captors on an unforgettable ride that will have you questioning the depth of your faith and sitting on the edge of your seat as it grabs your attention from the first sentence and keeps you riveted until the very end.

About the Author
Nichole Petersen Giles is the daughter of Joseph Petersen, Mel and Jeneal’s second child and firstborn son. She was born in Nevada, and moved with her parents to a number of cities in and around the Midwest, mostly staying in Utah, Nevada, Arizona, and snatches of time in Texas. Her future aspirations include adding a tropical island to her growing list of locations. For now, she plans to travel to as many tropical locations as possible, scouting for her future home in paradise. Her early career plans included becoming a megastar actress or a rock star, but she decided instead to have a family and then become a writer, in that order. Writing is her passion, but she also loves to spend time with her family, travel, drive in the rain with the convertible top down, and play music at full volume so she can sing along. Her first book Mormon Mishaps and Mischief, an anthology of humorous anecdotes, was released in December 2009 by Cedar Fort Inc. and can be found online and wherever LDS books are sold. Some of her other work has been published in Highlights for Children, The Friend, and Boys’ Quest, and she blogs regularly at http://www.nicholegiles.blogspot.com/. For more information about Nichole or her work, contact her at writenichole@gmail.com.

I was sent this book by Utah author Nichole Giles after meeting her at Utah Authorpalooza. The story really hits home for me. My grandfather’s brother was killed by a hitchhiker he picked up in Utah back when he was a young father. And, my great Uncle left behind a young wife and family. ” The Sharp edge of a Knife” is a story filled with faith and prayers. It is a wonderful tale of how one person’s belief can influence the life of even the most hardened criminal. I especially loved Nichole’s historical information and newspaper clippings in the the back of the book. She is an awesome person and this book is based on the story of her own grandfather. Pick it up, it’s a good read!