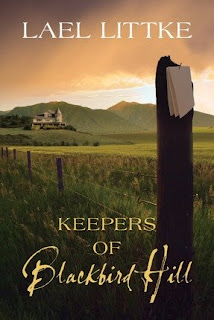 After sixteen years in Hollywood, Jayda returns to Blackbird Hill determined to save her childhood home and protect her inheritance of the family property. Orphaned as a young girl, Jayda stands alone against her extended family who want to sell the land to real estate developers. But the developers want all of the property or nothing, and Jayda is convinced that the old house is a powerful symbol of the past and should be preserved. To prove her point, Jayda begins researching the history of the century-old home and her ancestors, whose lives and secrets turn out to be more dramatic than any Hollywood script. Her main ally is a lonely seven-year-old boy, Smoot Ferguson, who lives nearby with his reclusive uncle. Despite opposition, Jayda and Smoot work tirelessly to save the home from destruction until something happens that puts Smoot in jeopardy and forces Jayda to examine her true motives—is she protecting the past or hiding from the future?
This story has some very interesting elements. Jayda has returned to Blackbird Hill after the breakup of her marriage, to save the family home. Along her journey she discovers a feud similar to the Hatfields and McCoys that exists between her family and another in the area. She is also reunited with her longtime friend (who could have been more) Lee, who is fighting his own daemons. When Jayda begins to receive increasingly violent threats, she becomes more and more determined to save her home.
It was cute and I enjoyed reading it. I liked the small town setting (as I grew up in a small town) and the emphasis on family history. I did have a hard time picturing Jayda in Hollywood. Her personality seemed sweet, and not toughened, from the start, as one expects from those in Hollywood.