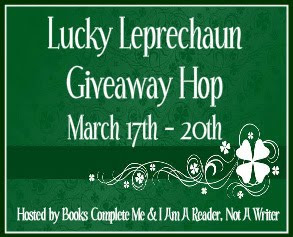 Welcome to the Lucky Leprechaun Blog Hop
hosted by I’m a Reader Not A Writer and our affiliates Books Complete Me.
Here at Fire and Ice are giving away a paperback copy of Maximum Ride by James Patterson 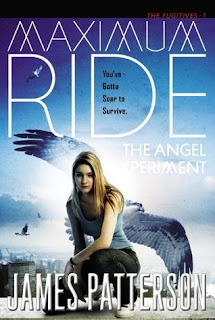 Paperback, 422 pages
Published 2007
by Little, Brown
series Maximum Ride #1
Summary: Fourteen-year-old Maximum Ride, better known as Max, knows what it’s like to soar above the world. She and all the members of the “Flock”–Fang, Iggy, Nudge, Gasman and Angel–are just like ordinary kids–only they have wings and can fly. It may seem like a dream come true to some, but their lives can morph into a living nightmare at any time–like when Angel, the youngest member of the “Flock,” is kidnapped and taken back to the “School” where she and the others were genetically engineered by sinister scientists. Her friends brave a journey to Death Valley, CA, to save Angel, but soon enough, they find themselves in yet another nightmare–this one involving fighting off the half-human, half-wolf “Erasers” in New York City. Whether in the treetops of Central Park or in the bowels of the Manhattan subway system, Max and her adopted family take the ride of their lives. Along the way Max discovers from her old friend and father-figure Jeb–now her betrayed and greatest enemy–that her purpose is save the world–but can she?

Plus we are adding a sneak preview special edition booklet to book #6 FANG.
To enter to win simply fill out this form.
Our Lucky Leprechaun giveway ends at midnight Sunday March 20, 2011 and is open internationally.
Be sure to visit the over 200 sites participating for more blog hop prizes and check out our right sidebar for current Fire and Ice giveaways. Good Luck to you!

Being a kid with wings–constantly on the run–has never been easy, and Max and her flock are getting tenser than ever. First, on a trip to Africa, they meet a mysterious billionaire whose intense scrutiny of the Flock makes her fear the worst. And as if an impending apocalypse weren’t bad enough, canny birdkid Angel makes a dire prophecy about Max’s soul mate: Fang will be the first to die. Max’s desperate desire to protect Fang brings the two closer than ever. But can the team weather the storm, or will the turmoil rip them apart for the last time?

This is my very first book by James Patterson in his Maximum Ride series. Little Brown was kind enough to send me a copy for review and I just jumped right in. No expectations, and no emotional investment in the characters from five previous books.

Book six starts out with a flock of genetically altered bird children on their way to Africa for a CSM humanitarian mission. They run into evil scientists Dr. G-H and Dr. Chu. who are busy brewing up experiements advanced DNA mutation and want Max to offer the flock as subjects. Max the main character, MC and flock leader is sarcastic and hot tempered, with a chip on her shoulder. She tends to run away when things get tough. So as Dr. G-H introduces Dylan, another birdboy created expressly to be her perfect other half, she is out of there! She has just recently gone public in her relationship with Fang, her lifetime friend and second in command and the flock is not pleased.

There are two main male protagonists that are both vying for Max’s attention. Fang is closed secretive and strong while Dylan with his Caribbean eyes is open and wanting to learn. The ultimate question of the book is will Max be forced to choose between the one she’s always known and a new addition to her flock?

Fang is action packed as the flock faces wolf-like Erasers, mad scientists and a threat form within. One of the flock has double crossed the rest and Fang may pay the ultimate price with his life.

James Patterson has quite the happening series going on with a TON of online fans. I can see the appeal in his story and the fantasy. If I had read the entire series I think my rating would be higher. I would have liked to see more world building in their Colorado home where they retreat to for homeschooling and to hide out. Also, as Max and Fang head out on their own to Las Vegas there was a window of opportunity for fun, creative scenes which I felt wasn’t taken. As a reader I would hope down the line Patterson will expose us to more of what is going on inside Dylan and Fang’s mind. Fang fans will be happy to see the epilogue contains some of his secret memoirs that Max finds on their laptop. You’ll see a whole new side to the main man.

My favorite part is the letter Fang leaves for Max in the final chapter, and his promise for twenty years from now. I loved the additional materials in the back of the book which include a Chapter 35 1/2 written by a reader, a sneak preview to ANGEL due to be released February 14th and part of a new Manga adaptation of the book. I will pick up book 7 now that I’ve jumped in and need to know what happens! I found Fang entertaining and well suited for both boys and young women. There is minor violence, mention of underage tattoos and gambling but all around it’s a clean read. I’m looking now to try more titles by James Patterson. Visit the official site for James Patterson’s Maximum Ride at http://www.max-dan-wiz.com/

Fire and Ice giving away a paperback copy of Fang, a Maximum Ride Book #6 to our readers, donated by Little Brown. To enter to win fill out this form.