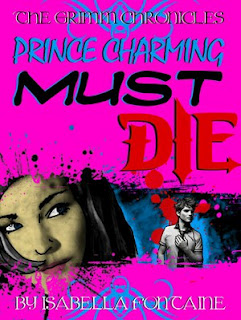 Prince Charming Must Die
by Isabella Fontaine and Ken Brosky
Kindle edition, 91 pages
Published April 2010
by Brew City Press
A Sin: B007V4JAO0
Book Source: Author
Summary from Goodreads: On the eve of her 18th birthday, high school junior Alice Goodenough feels on top of the world. Classes are almost finished. She’s about to start her summer job at the local library, where she’ll be surrounded by all of her favorite books. And she has a wonderful boyfriend.
Then the rabbit shows up. The giant talking rabbit. He has a message:

200 years ago, the Brothers Grimm unleashed their stories upon the world.
Literally.

With the help of a magic pen and paper, Jacob and Wilhelm Grimm brought all of their characters to life. The world was a more magical place … for a time. Cinderella found her prince. Briar Rose’s spell was broken. The dancing princesses spent their nights hidden away in a secret underground city. The old miller’s boy found true love.

Then, slowly, the Grimms’ characters began to change for the worse. They became Corrupted. Evil. They didn’t belong in our world, but it was too late for the Brothers Grimm to destroy them.

Only a hero can save the day. Every generation for the past 200 years, a hero has been chosen to fight the Corrupted and rid the world of the Grimms’ fairy tales. To her horror, Alice has been chosen as the next hero. As her 18th birthday nears, she begins to realize life is never going back to normal. School will never be the same.

As for her boyfriend, Edward … well, he might be hiding a terrible secret.

Cathy’s review: Alice is almost 18, she has an amazing boyfriend, Edward, she loves to fence and she has a perfect volunteer job working in the library. Plus school’s almost over…what could go wrong? Plenty. On her first day at her library job she is asked to shelve an old book downstairs in the basement. In the basement she finds old books, a really old pen and a note… addressed to her, who could have known she would be down there? The note tells her to draw a door and not to forget the handle. This door opens to a room, where Alice finds a snake and another note telling her to kill it. The snake slithers away, and as it does it grows bigger. Alice uses the only weapon she has, the old pen, to stab the snake and that’s when the rabbit appears. Telling her a wild story about the Brothers Grimm’s stories, the characters become real and then they become corrupted. After they are corrupted, they need a hero, Alice, to kill them, so they can’t hurt anyone else. Alice quickly learns how to find the characters, but she’s not so sure she wants to kill them. Meanwhile, her “perfect” boyfriend has a secret of his own.
This book was just okay for me. I didn’t connect with the characters really. The story line is quite short, that might be part of why I didn’t connect with the characters, and the story seems quite rushed. There’s not really enough time to get to “know” them. I like to know my characters so that I can care what happens to them.
Content: Sexual references, teenage drinking

Mary’s Review: Alice is head over heals in love with Edward the new boy at school. He’s the most handsome boy any girl has ever seen and out of every girl in school to choose from he has chosen her. Has told her she is his soul mate. She also gets her dream job working in the library for the summer. How could she get so lucky?
But just when she thinks everything is perfect, she meets a giant talking rabbit who claims to be Briar Rabbit. That’s right. Straight from Grimm’s Fairy Tales. He tells her she is a “hero” and has been chosen to kill the Corrupted. Who are the Corrupted? What is a “hero”? Is Alice going crazy? This is where the adventure begins.
This is a great read and book 1 of the Grimm’s Chronicles series.
I recommend this for young adults ages 16 and up. It contains mild profanity and mild intimacy content not suitable for younger children.

About the authors: Isabella Fontaine lives a quiet life on a farm in rural Wisconsin. She enjoys reading Grimm’s Fairy Tales and writing on a typewriter, which annoys her cats. This is her first book collection. 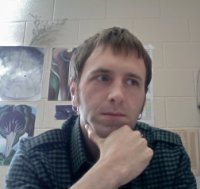 Ken Brosky received his MFA from the University of Nebraska-Omaha. He’s written a number of books and regularly publishes short stories. He also helps out at Brew City Press whenever possible. This is his first young adult collection.
Find out more about authors: Goodreads/ Website