Fire and Ice is happy to announce we are today’s stop on the Huber Hill and The Dead Man’s Treasure blog tour! We have an exclusive interview below with author B. K. Bostick and several giveaways to go along with the tour. Here’s a little about the book… 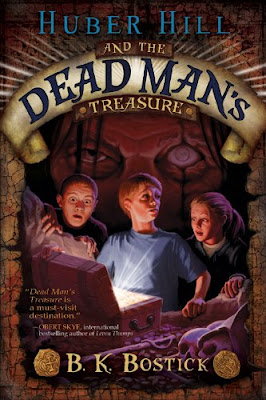 Huber Hill and the Dead Man’s Treasure
by B.K. Bostick
Paperback, 256 pages
Expected publication: October 28th 2011
by Bonneville Books
ISBN 1599559110
When his grandfather dies, Huber Hill is devastated—until he opens Grandpa Nick’s mysterious box. An old gold coin and directions to a hidden Spanish treasure send him and his friends off on an mind-blowing adventure, but he’s not the only one on the hunt. Filled with dangerous animals and cryptic puzzles, this book will have you on the edge of your seat until the last page
Author Interview: Tell us a little book about your book and what inspired it. My own grandpa definitely inspired the story. He would always share tales about Spanish treasure hidden up in the mountains nearby where we lived. I always imagined going on these wild adventures to find treasure. As I grew older, I realized that the real treasures were the stories my grandpa told me. I’ll always remember those days sitting at his side listening as he showed old maps, books, and artifacts. If there’s one theme to the story, it’s that relationships with friends and family are invaluable- of much more worth than any kind of money.

Where is it set? And what kind of research went into it? The story takes place in the mountain community of Carbondale, Colorado. The stories about Spanish gold in the Rockies are mostly folktales and oral histories. I read a couple of books in particular on the subject- Footprints in the Wilderness and Lost Gold of the Uintahs both by Gale Rhoades.

As a child and an adult what were your favorite books? As a child, I loved the Goosebumps series, but my all time favorite was RedWall by Brian Jacques. As an adult, I’ve grown nerdier- I love history books. My favorite for now is Team of Rivals by Doris Kearns Goodwin.

Who is your personal hero? I truly admire Lincoln. His tenacity, wit, and resilience are inspiring to me.

Any new works in progress? Right now I’m working on Huber Hill and the Brotherhood of Coronado (Oct. 2012). This is the follow up to Dead Man’s Treasure and will take place in Spain.

What has been the most rewarding part about being an author so far? There have been a few kids who have read the book so far and hearing that they enjoyed it makes all of it worthwhile. 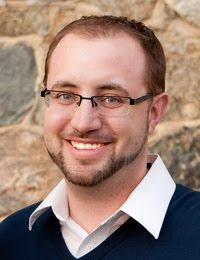 Which fictional character do you most Identify with? I see a bit of myself in Huber in terms of the relationship he had with his Grandpa and becoming best friends with someone he never expected.

About the Author:
B.K. Bostick, author of Dead Man’s Treasure, resides among the magnificent Rocky Mountains. In addition to writing, he has spent his career in education. He earned his Bachelor’s degree in Psychology from the University of Utah and his Masters in Psychology from Utah State University. He has worked as a teacher, after school program coordinator, junior high school counselor, and most recently as a teacher mentor for a University. He loves spending time with his lovely wife and two dogs. In his spare time, he enjoys eating cheetos and watching old episodes of the Twilight Zone.

The Fundraiser: Alyssa, my neighbor, was diagnosed with a Meningioma brain tumor on December 5th, 2010. The only way to get it out was through surgery. It took four surgeries to get out as much of the tumor as they could and now she’s almost finished with her radiation treatments. Alyssa is an inspiration to me. Her positive outlook and attitude while facing something so terrible is truly remarkable. Because of the inspiration she’s given me, I am trying to give back. I will be donating 100% of profits from all pre orders of Huber Hill and the Dead Man’s Treasure along with sales during the first two weeks of launch (Oct. 1-16) to Alyssa and her family. Visit http://www.treasureforalyssa.com/

Giveaway from the author: I’ll also be giving away a replicated gold coin/bookmark to each reader who goes to my author page on facebook and clicks the “like” button. Go to: http://www.facebook.com/bkbostickauthorpage.