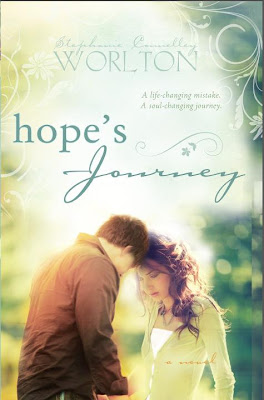 Sydney is a straight-A student heading to college on a scholarship, and Alex is a quiet jock preparing to serve an LDS mission. But their dreams are shattered on the eve of their high school graduation when they find out that Sydney is pregnant. Separated, they must both trust in God as they search for the worth they once found in each other.

Hope’s Journey is a book that will leave a lasting impression in your mind and heart long after you are done reading. For me it was sad in the beginning because it was easily what could and does happen to so many youth. As the story progressed I could literally feel the heart wrenching experiences and feelings both Alex and Sydney were going through. This is not an easy read because it tackles the issue of teenage pregnancy, the road through repentance the social shunning that comes as a result of other people’s judgements and the anger of dreams lost. It is beautifully written and heart wrenching, so very real. I would recommend this to all teens, male and female, youth leaders and parents. I admire that the author does not skirt around the issues but meets them head on. She teaches that self-worth and confidence are at the core of the problem. I also love that she teaches there is a merciful Father in Heaven who knows us each individually and answers our prayers. Sydney took the road less traveled and she does it bravely because she knows it is right. An absolutely moving debut that I will keep and pass on.
There were several things that left me wanting as I finished…so here is my fair warning of a *spoiler alert*
*I wanted Alex to mature a little more than he did in the 40 weeks he had to think about his future and I was disappointed in the way he handled the news he was going to be a father. He seemed pretty self-centered and immature in comparison to all the progress and growth Sydney made. I also really wanted to see some closure in the confrontation between Alex’s mother and Sydney. Did he even knew that conversation took place? How did the mother handle the way things ended up? I have to admit that deep down I sad she didn’t pick Damon. Could a guy be more perfect? He was an amazing friend and so much more. As well, I think the author left the issue of Sydney’s brother deicing not to go on a mission open ended. Why did he decide not to go and where did he end up? As far as the ending… WOW …so not what I was expecting. A few more chapters may have been good to win me over. I want to see how the road new parents and teen newlyweds was a hard road. I am sure the couple faced many more challenges in their immediate future. Teens need to realize that marriage is hard work and not the end, but just the beginning. * (end of spoliers)
When I read the epilogue and realized Hope’s Journey was a story based on the author’s own experience I was amazed. I admire that she is brave enough and felt compelled to tell her own story within a fictional framework. I would recommend reading the author’s end notes, interviews and the post on the inspiration behind the story on her blog. What a gift Stephanie Worlton has left for each of us. Well done!

About the Author: Stephanie Connelley Worlton pursued a degree in Architecture before turning her creative energy towards other forms of artistic expression including writing. Through her many associations with youth, Stephanie felt prompted to channel her own experience as a teenage mother into a work that might open the eyes of understanding, break down stereotypes, cause youth to reevaluate their relationships, and ultimately provide hope for those in the trenches of an unplanned pregnancy. Aside from the busy schedule she keeps as a wife and mother of four, Stephanie enjoys interior design, gardening, carpentry, painting, and being involved with the youth of our rising generation.

Read a sample of the book at hopesjourneybook.com

Hope’s Journey Giveaway: As part of Hope’s Journey’s blog tour, we will be giving away an autographed copy of Hope’s Journey to one lucky winner. To enter, simply visit the author’s blog and leave a comment on the BLOG TOUR page. Plus, for a few bonus entries, “like” Hope’s Journey on Facebook or become a follower of Stephanie’s blog. It’s that easy!

Contest is limited to those within the continental US. Each person is eligible for up to three (3) entries. Contest closes at 11:59pm November 14, 2011. Winner will be selected by random.org then notified via email and listed at stephanieworlton.blogspot.com on November 15, 2011.