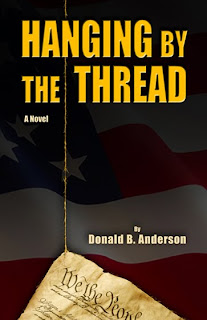 For ten years, a secret society has risen to power. They have infiltrated every facet of the federal government. They are powerful. They have extraordinary access to public funds. They have incredible technologies. And freedom is their nemesis.

They have sought to destroy economic freedom, amass power to the federal government, and create mass dependency. They call themselves THE THREAD. And now, they are poised to destroy the Constitution and rise to power. But, on the eve of their burst into power, a copy of their plan falls into the hands of a young man in the Utah State Capitol building. A small group forms and comes to understand the plan of The Thread. And now, the race is on. Time is short and the group must struggle to preserve their lives, their nation, and freedom itself.

It also contains a fantastic lecture series that powerfully conveys the principles of freedom. Hanging By The Thread is a freedom thriller that educates.

Hanging By The Thread is an action packed page turner, perfect for those who read Tom Clancey. Mr. Anderson teaches important lessons in freedom and the Constitution. He also offers readers a tension building interesting plot. His style reminds me of a book ready to be made into movie- with the story a cross between Mission Impossible and Air Force One. An uncovered conspiracy threatens those who find it. It’s a race against the clock to get “The Thread” out into the open before someone else’s life is forfeit. Fans of financial independence and students of American politics will especially enjoy the lecture series in the final pages…interesting and intelligent writing with teachings that may change the course of America as we know it.

Read the first three chapters and learn more about Hanging by The Thread at Donald’s blog http://donaldbanderson.blogspot.com/p/story_25.html

We are giving away an author signed copy to our readers! Simply comment below to be entered. Contest ends December 29, 2010