Harper Teen has sent us some awesome news in April and they are happy to announce that The Fame Game by Lauren Conrad hit the NYT bestsellers list at #1! To celebrate we are giving away one Advanced Reading Copy to a lucky Fire and Ice reader. 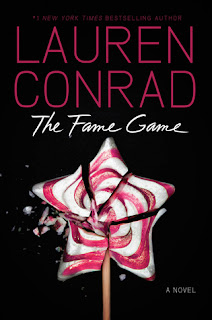 The Fame Game
Fame Game #1
by Lauren Conrad
Hardcover, 313 pages
Published April 3rd 2012
by HarperTeen
ISBN 0062073281
Book Summary From Goodreads: In Hollywood, fame can be found on every corner and behind any door. You just have to know where to look for it. Nineteen-year-old Madison Parker made a name for herself as best frenemy of nice-girl-next-door Jane Roberts on the hot reality show L.A. Candy. Now Madison’s ready for her turn in the spotlight and she’ll stop at nothing to get it. Sure, she’s the star of a new show, but with backstabbing friends and suspicious family members trying to bring her down, Madison has her work cut out for her. Plus, there’s a new nice girl in “reality” town—aspiring actress Carmen Price, the daughter of Hollywood royalty—and she’s a lot more experienced at playing the fame game… When the camera’s start rolling, whose star will shine brighter?
Filled with characters both familiar and new, Lauren Conrad’s series about the highs and lows of being famous delivers Hollywood gossip and drama at every turn.
About the author: Lauren Katherine Conrad, often referred to as “L.C.”, is an American television personality and an aspiring fashion designer. She is best known for being featured in the MTV reality series Laguna Beach: The Real Orange County and for her spin-off show, The Hills, which follows her personal and professional life as she pursues a career in the fashion industry. She earns an estimated $1.5 million annually for her television appearances, fashion line, and product endorsements.
Find Lauren on Harper Teen/ Facebook/ Goodreads/ Twitter/ Her Website
The Giveaway: Fire and Ice has one advanced reading copy of the Fame Game to give away to our readers courtesy of HarperTeen. Must be 13 or older and have a US mailing address. To enter, fill out the rafflecopter form below.