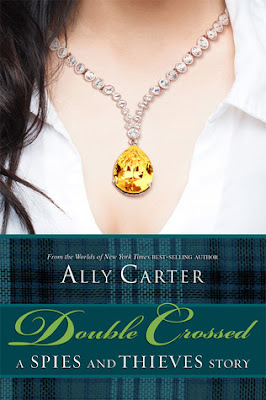 Double Crossed: A Spies and Thieves Story
by Ally Carter
ebook, 60 pages
Published January 22nd 2013
by Disney Hyperion
ISBN1423187474
Heist Society #2.5, Gallagher Girls #5.5
Book Source: Netgalley
4 stars
Summary from Goodreads: Macey McHenry—Glamorous society girl or spy-in-training?
W.W. Hale V—Heir to an American dynasty or master thief?
There are two sides to every coin. Whether these two can work together is a tossup.
Born into privilege, Macey and Hale are experts at mingling with the upper class. But even if they’ve never raised an eyebrow at the glitz, neither teenager has ever felt at home with the glamour.
When Macey and Hale meet at a society gala, the party takes a dangerous turn. Suddenly they’re at the center of a hostage situation, and it’s up to them to stop the thugs from becoming hostile. Will Macey’s spy skills and Hale’s con-man ways be enough to outsmart a ruthless gang? Or will they have to seek out the ultimate inside girl to help?
The worlds of Heist Society and the Gallagher Girls collide in Ally Carter’s fast-paced, high-stakes and tantalizing new story. Get a behind the scenes glimpse as Ally delivers an irresistible thriller that is full of her signature style and savvy twists.
Review: Ally Carter is one of those automatic authors for me…I see a book she releases and I buy it. I was first introduced to her Heist Society series while browsing art at the Met Museum in NYC with Tales of A Ravenous Readr. Since reading Uncommon Criminals I’ve been hooked! When I saw this fun novella that blends both of her series characters into one setting I had to check it out.  I’ve never read the Gallagher Girls, but they are at the top of my wish list after sampling Macey’s personality in Double Crossed. I want to get to know Macey McHenry as well as I now know Hale. The aloof, ruffled, handsome Heister I know and love.
Macey and Hale are thrown into a high stake situation at a high society gala when the event is hijacked by men in masks. They have the jaws of life and don;t seem to be in much of a hurry to pull off the job–so what are they really after?  The banter between Macey and Hale makes me want to see much more interaction between these two series. Both are confident in their abilities and both have an air of “I know best.”  We also have some cameos by others from the books and the result is a mash up of awesome proportions.  If you haven;t discovered Ally Carter check this one out for free on Netgalley to wet your whistle and then dive right in!
Content: moderate violence, recommend for ages 16 and up

Author Bio from her website: I  was born and raised in Oklahoma. My mother was a teacher and my father a farmer and rancher. I have one older sister. 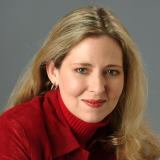 In high school, I was very active in a number of student organizations and graduated as co-valedictorian of my senior class. I then attended Oklahoma State University and Cornell University and worked for several years in the agricultural industry before writing full-time.
My first novel, Cheating at Solitaire (Berkley) was published in 2005. The following year I published the sequel to Solitaire, Learning to Play Gin. There are no more plans for future books in that series at this time.
My first novel for young adults, I’d Tell You I Love You but Then I’d Have to Kill You was published by Disney-Hyperion in April 2006. Love You Kill You (as we call it) was followed by Cross My Heart and Hope to Spy (October 2007), Don’t Judge a Girl By Her Cover (June 2009), Only the Good Spy Young (June 2010), Out of Sight, Out of Time (March 2012). Book six will be the final Gallagher Girls novel. Look for it in stores in 2013.
I am also the author of Heist Society (February 2010) and its sequels Uncommon Criminals (June 2011), and Perfect Scoundrels (February 2013).
My books have been published in more than twenty countries and have appeared on best-seller lists from the New York Times, USA Today, the Wall Street Journal, Barnes and Noble, IndieBound, and Bookscan. They have sold over two million copies.
I am one of the luckiest people in the world, and today, I’m able to do the job I wanted to do when I was a kid, and I am back living in Oklahoma.
Goodreads/ Ally’s blog/ website/ Facebook