Child of the Mist (These Highland Hills Book #1)

by Kathleen Morgan
E book, 332 pages
Published February 1st 2005
by Fleming H. Revell Company
Adult
Christian fiction?, romance
Source: bought
3 stars
In the harsh Scottish highlands of 1565, superstition and treachery threaten a truce between rival clans. It’s a weak truce at first, bound only by an arranged engagement between Anne MacGregor and Niall Campbell-the heirs of the feuding families.
While Niall wrestles with his suspicions about a traitor in his clan, Anne’s actions do not go unnoticed. And as accusations of witchcraft abound, the strong and sometimes callous Campbell heir must fight for Anne’s safety among disconcerted clan members. Meanwhile his own safety in threatened with the ever-present threat of someone who wants him dead.
Will Niall discover the traitor’s identity in time? Can Anne find a way to fit into her new surroundings? Will the two learn to love each other despite the conflict? With a perfect mix of a burgeoning romance and thrilling suspense, this book is historical fiction at its best
Breview: This was my first experience with Christian Scottish Fiction and I enjoyed the historical elements of the harsh conditions of women being accused of witchcraft for wanting to use herbs in their healing, or assisting in resuscitation of an infant. The arranged marriage and clan clashes also rang true to the period as well as the Scottish language which takes some getting used to. The writing was well paced and very interesting, characters defined in a way that I can still remember them after having read the book a month ago.
What I didn’t like: it feels like a romance that tried to convert itself to Christian and left some tidbits of content I hated along the way. The relationship between Niall and Anne is abusive at times and he has a tryst with a servant which should have been completely omitted in order for it to be a Christian title, in my opinion. It also has a darker element as there is someone who seeks Anne’s life, which adds suspense but at times it seems her pull to do dangerous things repeats itself.
Overall, to be honest, it was memorable. I loved the setting and imagery as well as the flow of the story, but the content was disappointing.
Content: (highlight to reveal) Domestic violence, sensuality, moderate violence, heavy petting. For adults.

How to Love a Princess

by Claire Robyns
Kindle Edition, 159 pages
Published October 23rd 2012
ASINB009W7XYVY
Book Source: Bought
Adult
Contemporary Romance
4 stars
Love exploded into the sheltered life of Princess Catherine de’Ariggo when she met Nicolas Vecca. But duty calls Catherine to sacrifice that love. Now, years later, she must be strong once more. Can she ignore the whisperings of her heart and stand firm in her convictions? Trusting in Nicolas, loving him, is a risk she dare not take.
When Nicolas sees Catherine again, he thinks he’s looking at a ghost. Either that, or he has been cruelly deceived. Haunted love turns to hate. But even as he determines to remain unforgiving, his heart refuses to forget.
Breview: This one didn’t start out strong for me and I think the first chapter’s relationship encounter between the two main characters could have been left out until almost the very end. It didn’t sync with what we learn about them later on.
But, things got much better and overall I truly enjoyed this freebie. It’s almost like The Princess Diaries meets Shannon Hale for adults. While it’s contemporary, the setting feels more traditional–like a castle tucked away in space and time. I loved the main male character Nicolas. At times the female love interest’s pride and stubborn nature and bizarre philosophy of marriage got in the way of me truly binding to her. He’s a good one…pick him already!!
I really enjoyed the lesson of tenacity, loyalty and sticking by the side of the one you love. The mystery wrapped up a little too neatly and I wish we would have gotten to know the villain a little bit better, but I would definitely read another one from this author.
Content:  (highlight to reveal) premarital sex on two occasions, mild violence. For Adults.

Both of these reviewed books are still free in the Kindle store, click title or book cover to purchase!

DNF- Did Not Finish The Following E books Due To Content:
Finding Cinderella: A Novella by Colleen Hoover

The Academy – Introductions (Year One, Book One) (The Academy Series) by C. L. Stone

Over the past week I read the entire Selection Series by Kiera Cass. Harper Collins was kind enough to send me The Elite,  and since I never read book one, it was off to the library I went. I’ve heard these titles shelved in YA dystopian or fantasy, but I don’t think they really fit neatly into either category… you tell me what you think.
Here’s the brief low down on what I though of all three and the parental content warnings. 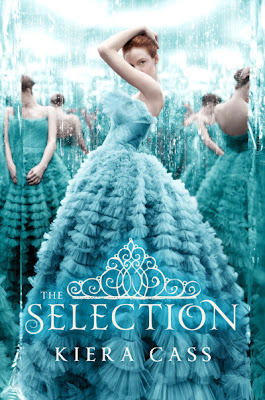 The Selection
Hardcover, 327 pages
Published April 24th 2012
by HarperTeen
ISBN 0062059939
Source: Library
For thirty-five girls, the Selection is the chance of a lifetime. The opportunity to escape the life laid out for them since birth. To be swept up in a world of glittering gowns and priceless jewels. To live in a palace and compete for the heart of gorgeous Prince Maxon.
But for America Singer, being Selected is a nightmare. It means turning her back on her secret love with Aspen, who is a caste below her. Leaving her home to enter a fierce competition for a crown she doesn’t want. Living in a palace that is constantly threatened by violent rebel attacks.
Then America meets Prince Maxon. Gradually, she starts to question all the plans she’s made for herself—and realizes that the life she’s always dreamed of may not compare to a future she never imagined.
Breview: If you are a fan of the TV series Bachelorette this has the same feeling to it. There are some light dystopian vibes as this is a futuristic society based on a tight caste system where the mates are selected for the prince.  The main man, Prince Maxon and some stilted and formal lines. I think was meant to be that way, but at times I still had trouble connecting to his way of talking.
I really struggled with Aspen and America’s relationship. He’s a creep! And the ending felt totally out of character for him.
There some great scenes of “ear tugging” conversations and sweet dates between Maxon and America Singer, the voice and MC of the book.
Content: I was bothered by the content in book one wouldn’t let my daughters read it. Highlight below with your cursor to reveal content.
Content: Youth sneaking out, heavy making out, talk of being a virgin, some chauvinistic views of women and iea they could be taken advantage of. Too much sexual content for my taste. Drinking. 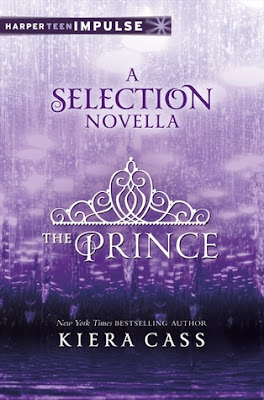 The Prince (The Selection #0.5)
by Kiera Cass
ebook, 64 pages
Published March 5th 2013
by HarperTeen
ISBN 0062248162
Source: Bought on Amazon
Before thirty-five girls were chosen to compete in the Selection . . .
Before Aspen broke America’s heart . . .
There was another girl in Prince Maxon’s life. . . .
Don’t miss this thrilling 64-page digital original novella set in the world of the New York Times bestselling novel The Selection. Also features a teaser to The Elite, Kiera Cass’s hotly anticipated sequel to The Selection.
Breview: I really enjoyed hearing things from Maxon’s point of view, since both books one and two are written in America’s voice. And we learn more about the behind the scenes of why each girl was chosen as well as a glimpse of the King and Queen’s personalities.
I wish the novella were a bit longer, it seemed super short. But there are sneak peek pages in the back for The Elite.
Content: clean 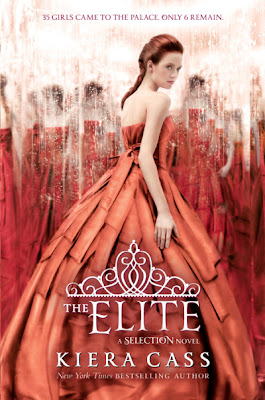 The Elite (The Selection, #2)
Hardcover, 323 pages
Published April 23rd 2013
by HarperTeen
ISBN 0062059963
Source: Publisher
Thirty-five girls came to the palace to compete in the Selection. All but six have been sent home. And only one will get to marry Prince Maxon and be crowned princess of Illea.
America still isn’t sure where her heart lies. When she’s with Maxon, she’s swept up in their new and breathless romance, and can’t dream of being with anyone else. But whenever she sees Aspen standing guard around the palace, and is overcome with memories of the life they planned to share. With the group narrowed down to the Elite, the other girls are even more determined to win Maxon over—and time is running out for America to decide.
Just when America is sure she’s made her choice, a devastating loss makes her question everything again. And while she’s struggling to imagine her future, the violent rebels that are determined to overthrow the monarchy are growing stronger and their plans could destroy her chance at any kind of happy ending.
Click here for teasers from The Elite.
Breview: AAARRRRG. The back and forth in The Elite killed me. It got really annoying to have America flip flop over and over again. Make up your mind sister! And please be honest with the one being left in the dark.  Book two has more violence and dystopian elements, so overall a darker tone. Chapter ten is where it really starts to turn violent for a heads up. Definite love triangle tangle going. Without spoiling, I was disappointed by Maxon’s explanation for his behavior, when he’s been such a gentleman with America.
Highlight the next sentence with cursor for content: heavy violence, child abuse, underage drinking, heavy petting in a bedroom, making out / cheating used as a way “to relieve stress” , mention of teenage pregnancy. one swear word.

In a Nutshell: This is a very popular series based on the waiting list at the library for book one. I have to admit, I enjoyed it enough to buy the novella and read book two, but I wouldn’t pass it on to my own tweens. I’m truly hoping the love triangle gets resolved ASAP because to me the choice is obvious…Maxon, would be my selection. 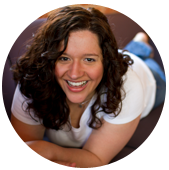