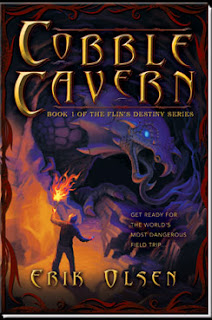 Cobble Cavern
by Erik Olsen
Hardcover, 304 pages
Expected Publication Date: April 4, 2012
by Cedar Fort
ISBN: 9781462110094
Book Source: Net Galley
3 Stars
﻿
Book Summary: What starts out to be a fun field trip to Ireland for Flin and his school debate team, turns into a life changing adventure. Flin and his teammates get swallowed by an earthquake and become trapped under the ocean inside a clear dome where they discover an unknown civilization. Join Flin and his classmates on a journey of a lifetime in this thrilling adventure story.
Cathy’s Review: Flin is just turning 13 years old as part of his family’s tradition, when they turn 13 they receive a ring made by their great-grandfather. Only you don’t pick your ring, your ring picks you. Flin was very excited to receive his ring, as his family is very poor, it’s his only birthday present. He is also really excited to go on his school field trip the very next day. His school debate team is going to Ireland to watch international debate competitions. It will be Flin’s first flight and the first flight of anyone in his immediate family. The debate team gets more than it had bargained for when their bus is swallowed up by the earth during an earthquake. They must work together to find a way out. The adventure in this story was really fun. I enjoyed the story line quite a bit. I felt like the story was a bit disjointed though. I didn’t feel like it always made a lot of sense. The characters seemed real, and I liked how they were able to deal with the challenges that came their way. I think that the target audience for this book, elementary aged boys, will really love this one!
Content: There’s some moments of peril, and some bullying, but other than that really nothing.

About the author: Jon Erik Olsen lives in Sandy, Utah, where he enjoys the mountains and is surrounded by a great family and friends that have continued to support him throughout his writing quest. After having one of the world’s craziest dreams, he has written a series of five books detailing it called Flins Destiny, which is full of continuous action and adventure deep in the earth and keeps you wanting more.
Find out more about author Erik Olsen Website/ Goodreads/ Book Poster Page/