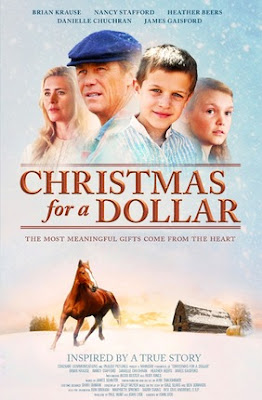 Christmas For A Dollar
Genre: Drama, family
To be released: November 2013 (USA)
Director: John Lyde
Writer: Sally Meyer
Stars: Brian Krause, Nancy Stafford, Danielle Chuchran
Movie Source: Publisher
5 stars
Movie Summary from Imdb: America is in the midst of the Depression, and the Kamp family is struggling to get by, especially after Mrs. Kamp’s untimely death. Now little Ruthie, with her mother gone and her father overwhelmed by doctor bills resulting from her brother s polio, expects another Christmas without presents or festivities. But when her father brings home one dollar in change and lets the children use it to buy special gifts for each other, the Kamps come to find that money isn’t what fills Christmas with joy, love, and miracles. Written by Covenant Communications
Christmas For A Dollar is based on the children’s book of the same name, written by Gale Sears, and illustrated by Ben Sowards.
Review: I received a full pre-release copy of Christmas For A Dollar from LDSBA and Covenant Communications and we used it as a family night activity. Little did we know we would all be in tears at the poignant message and heart warming hero with disabilities. Grab a kleenex box before sitting down!
The DVD is set in the time of the depression when times are already hard, but even more than usual for the motherless Kamp family. Their father is proud and determined to make it on his own, without outside help or suggestion. Oldest daughter Verna is left to fill her mother’s role as a teenage girl. Christmas is coming and the family has little to spare, but somehow they find a way to make it magical for each other.
We loved this movie! It was filmed at This is the Place Pioneer Heritage Park and at times there were a few setting slips like concrete sidewalks or modern props that seemed out of place with the era it is supposed to represent, but overall my impression was a good one. We own the original book and illustrated DVD released in 2009, but this one is our favorite of the three. Christmas for a Dollar carries a wonderful moral about being honest, loyal and brave in the midst of adversity. It held the interest of my entire family and I would recommend it to all ages!
Content: some mild violence involving a knife, fist fights and childhood bullying