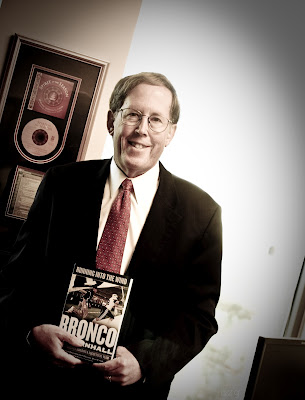 Paul Gustavson is most well-known for his work with Fortune 500 companies, helping them to reorganize and strategize to excel and improve their performance as a team and as an organization. Perhaps one of his most rewarding assignments came in 2005 when Bronco Mendenhall called on him for help in reigniting the competitive spirit of the BYU football team. Bronco had a tough job as a brand-new head coach of a team that was failing and was looking for a way to rebuild the image, character, and success of the team.
During my face-to-face interview with Gustavson, he shared some of the reasons he went into the field of organizational behavior in the first place. His father was an engineer at AT&T and his mother a nurse in the suburbs of Kansas City when Paul was growing up. He told me “I recognized as a child that whatever happens at work carries over into the home. When things weren’t that great at work, my parents would come home and ask why hadn’t the lawn been mowed or why hadn’t you been good to your brothers and sister? If, on the other hand, my mother had a good day at work, she would come home and bake the best apple pie; same parents, different type of day at work different result at home. In high school, when I saw the guidance counselor one day, I simply said ‘I want to create great places for people to work.’ “
“I attended Ricks College for one year, then served a full-time mission for the LDS church to Brazil. I had played football before serving my mission and had a desire to continue playing upon returning. When the school wanted me to come home early from my mission and restart football training to retain my scholarhsip, I decided instead to serve the full two-year mission and give up my hope of playing football.”
“I had a wonderful and motivational mission president (George A. Oaks) who taught me D&C 82:10 and told me that because of my faithfulness in serving a full mission, that if I had the desire, I would be given that opportunity to play BYU football. So in 1972 I was the first player to walk on to the football team under the new Head Coach LaVell Edwards. I did so at the suggestion of Keith ‘Mad Dog’ Rivera, who encouraged and befriended me and later a great blessing in my life was that he joined the church.”
“As a senior in college I took a class from Dr. Keith Warner in complex organizations and he pointed me toward the Organizational Behavior program at BYU to fulfill my dream of learning how to create great places for people to work. Later I worked with Bill Dyer as a teaching assistant and research assistant and learned about building successful teams and workplaces. 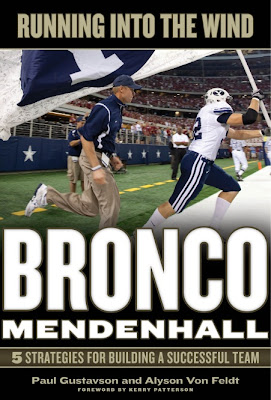 It was this love of both BYU and football that led Paul Gustavson to work with Coach Mendenhall and to capture their experiences together with co author Alyson Von Feldt in the new book “Running Into the Wind.” The book, from Deseret Book, which hit shelves today, is a unique backstage look at Mendenhall — a very rare view into his thoughts and feelings.
Gustavson said “Bronco believes you play football not just for the football, but to increase the exposure of the Church. By playing well, the players become role models. Coach Mendenhall teaches that first comes faith, second family, third friends, fourth education, and that last on the list is the football. Paul taught Mendenhall the principles he has been using in organizational behavior and team-building. As a result, parts of Bronco’s team-building activities have integrated one of Gustavson’s concepts: that ‘strong facilitators of long-term memory include emotional experiences, metaphor, and music.’ ”
In one such metaphorical and emotional experience, Coach Mendenhall took the brand-new team to the Provo River. He had the players take an hour to write down, on large sheets of paper, everything they didn’t like about the current BYU football team. Once they had it all on paper, these lists of past grievances was thrown into a giant bonfire and the team watched them burn. Mendehall then said “that’s the past. Now, what do you want in the future and what are you willing to do to fix it?”
In another act of exceptional leadership, Mendenhall had all the football players run to the top of the Y, painted on a mountaintop overlooking BYU in Provo. Once they got there, Bronco pointed out that “the view is different from the top than it is from the bottom.” Perhaps the one of the most significant emotional experience that Paul and Alyson write about in the book is when Coach Mendenhall took all of his players into LaVell Edwards Stadium, had them lay on the grass and close their eyes. He then played, on the stadium sound system, sound bites from BYU’s most impactful past games. These and other powerful stories — told through the perspectives of Bronco, Paul, the players, and the coaches — are shared in the book’s 11 chapters and its 23 different video clips. Readers get a first-hand visual experience by using a QR scan code. With a phone or other electronic device, they can watch video footages of Paul and Bronco that correspond to the sections they are reading. 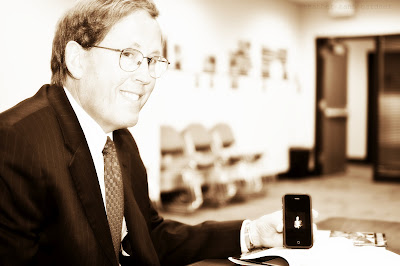 While Section 1 of “Running Into the Wind” introduces the reader to Bronco Mendenhall, Section 2 is a reader’s coaching session that “reveals a bit more about the ideas and research behind each of Gustavson’s “smooth stones,” which are metaphors for five sets of principles and practices.
The first smooth stone, discussed in Chapter 13, is that “organizations can craft a sustainable competitive advantage through differentiation. Create competitive advantage by figuring out what is your uniqueness. What is it that makes you special? What do people say you’re really good at and what are you passionate about? We weren’t all made alike so what is your uniqueness.”
The second smooth stone is that “organizations are perfectly designed to get the results that they are currently getting. We have to ask ourselves if we don’t like the results that we are getting — what is it that we’re going to change? Ask ‘what are the choices I am making and how does that drive the results? ‘ “
The third smooth stone is that “organizations are made up of processes, and not all processes are created equal. Not all work is created equal. What is the most important work? Of all the things you do have you focused on, what’s the most important thing?”
The fourth smooth stone is that “knowledge is the purest form of competitive advantage.” It’s about the discovery of new ideas, sharing of new ideas, and tacit versus codifiable knowledge.”
The fifth and last smooth stone is “effective leaders capture hearts and minds; how do we capture hearts and minds?”
Running into the Wind captured my heart and mind as an interactive, spiritual reading experience. Meeting one of the authors, Paul Gustavson, and hearing him explain the five smooth stones through personal stories brought them to life. Thanks so much to Dave Kimball at Deseret Book for facilitating our interview.

Q&A with author Paul Gustavson
What legacy do you think Bronco Mendenhall will leave behind?
A legacy of great leaders he developed who are making a difference as husbands, fathers, in their faith, community and businesses.
If you had to describe him in one word what would it be?
Friend
You teach the use of emotional experiences, metaphor and music in your principles, what music moves you most? Do you have a few favorite hymns or songs?
My favorite performer is “The Boss” Bruce Springsteen and I love music by Enya (Paint the Sky with Stars) and Ray Lynch (creativity inducing)
My favorite Hymns are “Because I have Been Given Much”, “Families Can Be Together Forever” and “How Great Thou Art”
What are the three most influential books you’ve ever read?
The Book of Mormon— especially the story of the 2000 stripling warriors. I see the football team as the sons of Helaman, as role models.
Insight to Impact: Strategies for interpersonal and organizational change by William G Dyer
The Tipping Point by Malcolm Gladwell. 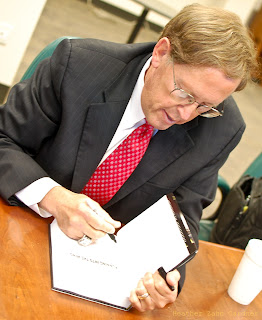 What has been your most moving experience as an author or working with Bronco that you can share?
As an author taking with Bronco about the title of this book. We were talking about the importance of the title and we had talked about some options and then Bronco said “Running into the Wind” and described how moved he was by President Hinckley’s 60 minutes story where he said having been invited to participate in the program that he could have hunkered down and done nothing or leaned into the stiff wind of opportunity. Bronco felt that he had been running not leaning. It just felt right and that was it.
One week when I was to meet with Bronco, three times I had felt a prompting to ask him a specific question before meeting with him. Once we were about to finish our meeting again the prompting came. I asked what was prompted which had to do with the schedule of the recruiting visit of key recruits and he responded to my question and I then felt prompted to ask about church on Sunday morning for the recruits. He said that they had a list of Church meetings that recruits and their families could attend. I felt prompted to say what about you organizing a Sacrament Meeting for the Recruits and their Families. He pondered what was said for a day or so and emailed me that he felt the counsel was consistent with what he believed even and that he was going to do it. He called me after the Sacrament Meeting and said that it was a wonderful meeting with a strong spirit and that tears flowed down the cheeks of mothers and fathers knowing that their sons would be well taken care of at BYU and by Bronco.
In working with Bronco Mendhenall how do you feel he is an example to his players and what sets him apart as a person/ coach?
He never asks them to do something that he isn’t willing to do. He is a master learner and a master teacher. He is a role model in all of the important areas of how one should live their lives.

Favorite works of fiction?
Dr. Seuss last book “Oh the Places You’ll Go”. With 8 grandkids age 7 and under Dr. Seuss books are a favorite right now
Do you have a mission statement, favorite quote or scripture you live by?
D&C 82:10 “I the Lord am Bound when you do what I say, when you do not what I say you have no promise”.
What do you hope readers take away from this book?
That they can apply these same “five smooth stones” I taught Bronco and captured in “Running into the Wind” in their lives and that the application of these principles will enrich their lives, their families lives and the lives of those they interactive with at work, school, community and their Church.
Bronco’s message is that “doing the right things you can be successful in all the areas that are important to you in your life”.
About The Author:  Paul W. Gustavson is a leading management consultant. He received his master’s degree in organizational behavior from BYU and has served for more than 18 years as a member of the Marriott School of Management’s OBHR Advisory Board. To learn more visit his website at www.organizationdesign.com
The giveaway: Deseret Book has generously donated two copies of Running into the Wind for the readers at Fire and Ice, and we had them signed by author Paul Gustavson. To enter to win a hardback copy of your own, fill out the rafflecopter form below.
a Rafflecopter giveaway