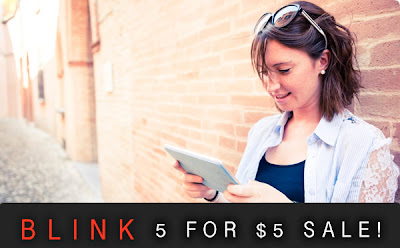 Blink YA books is having a 5 for $5 sale between now and September 20, 2013.
What is Blink you ask?
Quoting from Publisher’s Weekly…” Zondervan, a division of HarperCollins Christian Publishing, is launching Blink, a new YA imprint, with titles debuting this fall. Chriscynethia Floyd, v-p of marketing for Zondervan, said the imprint is designed for the general trade, not the Christian market: “These would be no different from other YA titles published by HarperCollins. They are for anyone, regardless of faith.” She added, “These will be hopeful books. We won’t go as dark [as some other YA novels], but we will touch on very real issues” while striving for a “positive balance and approach” and “[representing] morals and ethical standards.” Five to six titles per year are planned.”
Go get these five

In a dystopian future, most of the population is infected with a plague. The exceptions are those who live outside the Safe Land’s city walls. When a mutation in the plague sends city enforcers looking for the uninfected, Levi’s village is raided. While the attack leaves many dead, Levi’s fiancée is being held captive.

A strange meteorite. A deadly enchantment. And only Merlin can destroy it. A meteorite brings a mysterious black stone whose sinister power ensnares everyone except Merlin, the blind son of a swordsmith. Soon, all of Britain will be under its power, and he must destroy the stone—or die trying.

Like Moonlight at Low Tide: Sometimes the Current Is the Only Thing that Saves You

In Nicole Quigley’s debut YA novel, sixteen-year-old Melissa Keiser returns to her hometown expecting to face the same bullies who called her the ugliest girl in school. Instead her new appearance sparks interest from the popular crowd who made her miserable.

In the first book of the Halfling Trilogy, Nikki Youngblood discovers she’s the central force of a madman’s plan, and turns to three half-angel boys for protection. With the Halflings, she’s completely safe. Everything except her heart. And Mace’s soul. Falling for him could ensure his eternal ruin.

Guardian: They chose to protect her. But forgot to guard their hearts.
By Heather Burch

In book two of the Halflings Trilogy by author Heather Burch, Nikki Youngblood discovers there might be more to her gifts than simply Seeing—making her a central part of Damon Vessler’s plans. Mace and Raven are forced to work together to keep Nikki safe, but will their love and protection be enough to keep Nikki from the future set before her?

Click on the book cover or title to purchase in kindle form from our Amazon affiliate links.
Prices good until September 30, 2013 for Kindle and Nook.
As always, double check the price before you check out.