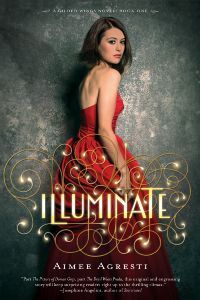 Illuminate
by Aimee Agresti
Hardback, 511 pages
Published:  March 6th 2012
by Houghton Mifflin Harcourt
ISBN   054762614
Book Source: Publisher
2 Stars
Book Summary From Goodreads: Haven Terra is a brainy, shy high school outcast. But everything begins to change when she turns sixteen. Along with her best friend Dante and their quiet and brilliant classmate Lance, she is awarded a prestigious internship in the big city— Chicago—and is sent to live and work at a swanky and stylish hotel under the watchful eyes of a group of gorgeous and shockingly young-looking strangers: powerful and alluring hotel owner Aurelia Brown; her second-in-command, the dashing Lucian Grove; and their stunning but aloof staff of glamazons called The Outfit.
As Haven begins falling for Lucian, she discovers that these beautiful people are not quite what they seem. With the help of a mysterious book, she uncovers a network of secret passageways from the hotel’s jazz-age past that leads her to the heart of the evil agenda of Aurelia and company: they’re in the business of buying souls. Will they succeed in wooing Haven to join them in their recruitment efforts, or will she be able to thwart this devilish set’s plans to take the souls of her classmates on prom night at the hotel?
Illuminate is an exciting saga of a teen’s first taste of independence, her experience in the lap of luxury, and her discovery she may possess strength greater than she ever knew.
Review by ephrielle:
This book not only is huge but it felt so long. It took most of a week for me to get through two thirds of it. It seemed to improve around three hundred pages. The story and the characters all started to flow and pique my interest. This quickly faded back to less than exciting and then into a confused mess of chaos.

Early on the vibe I got from this book was something very similar to Another Faust by  Daniel Nayeri and Dina Nayeri. A group of teenagers being offered a great future but it comes with a hitch. I couldn’t get over the complete unreality of the situation. Here is supposedly the biggest opportunity of their young lives, but when they start this killer opportunity they are left virtually to their own devices. I just couldn’t see how this “job” was going to set them on the path to greater success in the future. Two of these teens do seem mentally older than sixteen. In fact, I would say they have more of the attitude you would expect an adult to have looking back, not the attitude of two well adjusted teens. They are far too logical. There is this magical helpmeet in this book that made me think of the movie Jumanji. Read the vague statement and prepare for the worse. More like the magical helpmeet was having a joke at their expense.

There are so many characters with no emotions in this book. On top of that the main characters are somewhat flat. They try to keep up a witty banter but it just feels a bit overdone. The characters often take the joke to the point of awkwardness. Lucian felt like a one night sleaze. Every time Haven and Lucian interacted it was like she was drugged. Even the true romance was odd. “It was you,” just didn’t have as much impact as it should. I was lost and the explanation didn’t really make it seem that more romantic. The dude seemed rather unconcerned with the revelation of his feelings.


By far the most disappointing is the bad guys.
Bad Guys: Here is the ultimatum what is your choice? Wait I don’t want your decision until the 15th.


Duh, these are some dense weak villains. Their tactics of coercion weren’t very impressive. It didn’t seem as if they went through that much effort. A few under the table supplements and a couple short conversations for an entire school year is barely trying in my book. In fact it seemed they weren’t very eager to actually work hence the extra time to make a decision.


For such a long book there is very little explanation. The characters just didn’t sink their teeth into me and so I won’t be picking up the next book. If you liked Another Faust this may be just the book for you. 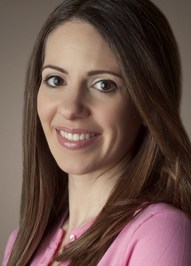 About the author: Aimee Agresti is an entertainment journalist with ten years of experience writing, editing, and chatting up celebrities. A former staff writer for Us Weekly magazine, she has interviewed everyone from Angelina Jolie and George Clooney to the stars of The Hills, and even penne

In addition to Us, her work has appeared in People, Premiere, DC Magazine, The Washington Post, Boston magazine, Women’s Health, Mademoiselle, and the New York Observer. She lives in Washington, DC.