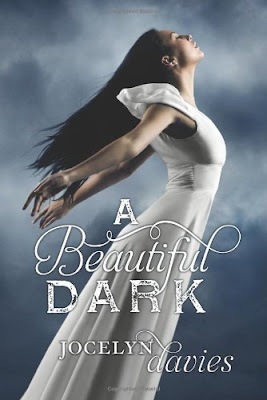 On the night of Skye’s seventeenth birthday, she meets two enigmatic strangers. Complete opposites;like fire and ice; Asher is dark and wild, while Devin is fair and aloof. Their sudden appearance sends Skye’s life into a tailspin. She has no idea what they want, or why they seem to follow her every move only that their presence coincides with a flurry of strange events. Soon she begins to doubt not just the identity of the two boys, but also the truth about her own past.

In the dead of a bitingly cold Colorado winter, Skye finds herself coming to terms with the impossible secret that threatens to shatter her world. Torn between Asher, who she can’t help falling for, and Devin, who she can’t stay away from, the consequences of Skye’s choice will reach further than the three of them could ever imagine.

This was one of the smoothest reading YA books I’ve picked up this year. I really enjoyed Jocelyn Davies style and the setting of a ski town in Colorado was perfect for this time of year. Skye is 17 years old and living with her “aunt” a friend of her mother’s since both of her parents were killed when she was young. She has faint memories of lullabies and a rescue but not much else to ground her to her past. A Beautiful Dark opens on her birthday as her three best friends throw a surprise party for her at the local coffee shop where Ian, one of them works. The action heats up fast when two mysterious teenage boys show up and start a fight. One of them is dark but inviting- Skye, the other holds the peace of calm ans serenity but is standoffish- Devin. When both boys show up to Skye’s school and start vying for her attention, Skye finds herself more confused and torn than ever before. Will this straight -A ski champion be able to handle the pressure when not only these two, but also her best friend Ian turns on the heat in the competition for her affection?

With paranormal elements and a new take on angel lore, A Beautiful Dark kept me flipping pages. I was a little disappointed that there was so much emphasis on teenage drinking, the opening scene with a flask and an unchaperoned arty with a keg. There was also a heavy hit of swearing about 3/4 of the way through that caught me off guard. What I found wonderful was the cast of secondary characters. My favorite scene of the book actually involved Skye’s best friends Cassie and Dan. As for Ian…he is amazing. I found myself pulling for him and was sad when he dropped into the periphery as Skye begins to get to know Asher and Devin. It’s kind of fun to have a book with a love square, and it would have added some action to see a little more conflict in between each of the contenders. I am sad when the good angel comes off as aloof or distant because of “rules” or extenuating circumstances- Devin reminded me a bit of Gabe in Original Sin by Lisa DesRochers. I wanted to know more about him and see he and Skye spend more time together without the interference of evil angel chick.

Overall, I truly enjoyed this first in theseries and will read book two, A Fractured Light, when it hits the shelves. But the ending…what?! GAH! It’s a cliffhanger.