Nearer to Thee continues the beautifully written account of young musician Mima Hough, based on the true story of a nineteenth century pioneer from England. In this thrilling sequel to The Water is Wide, Mima and her mother turn their eyes westward to the Salt Lake Valley, but to get there, they must follow a trail marked with cholera graves, treacherous rivers, and Native American tribes weary of invaders. Mima's journey across the plains is one of courage and self-discovery, of heartache and love. This long-awaited sequel continues the epic adventure of a young woman who experiences the life of a Mormon pioneer as an outsider. 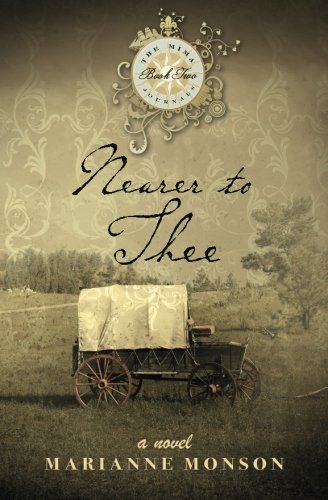 Since she was a very young child, Marianne Monson has been fascinated by the power of words (and even tried inventing her own language for a time). After earning a bachelor’s degree in English Literature from BYU, she continued her study at Vermont College of Fine Arts, earning an M.F.A. in Creative Writing. Since then, she has worked as an editor/art director of children’s books, authored eight books and counting for children and adults, and continues editing and writing for a variety of audiences, including magazines, books, blogs, and other publications.

She teaches Creative Writing and English at Portland Community College. Her two children are often featured in her work (and are self-confessed logophiles as well).