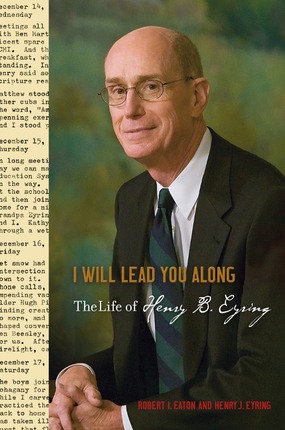 I Will Lead You Along: The Life of Henry B. Eyring

Henry Bennion Eyring was born on May 31, 1933, in Princeton, New Jersey, bearing the first name of his father, who was fast building a reputation as a brilliant scientist, and the family name of his mother, who didn't care for the name "Henry" and insisted that he be called Hal.

In 1970, Hal received an impression to make a daily record of his activities. Years of journals form the backbone of this personal biography, a candid look at his walk through life with his beloved companion, Kathy. "The journal shows how a good-but-imperfect man works each day to win divine approval," write the authors, and this window into his past provides unforgettable insights about the man the Lord has shaped him to become.

Readers will love these richly designed pages, filled with photographs, sketches from the pen of President Eyring himself, and scores of entries straight from his journals woven into an engaging depiction of his life's journey.

President Henry B. Eyring's professional, academic, and personal experiences have all combined to make him uniquely qualified for his responsibilities as a member of the First Presidency of The Church of Jesus Christ of Latter-day Saints. His life story vividly demonstrates the power of the Lord and the example set by one who strives to follow His commands.

This is the first biography I have ever read, and thanks to the amazing read it was, likely not the last. This 560 page inspirational  memoir outlines the life of Henry B. Eyring, who is called simply ” Hal” throughout the book. It’s full of sketches form his personal journal, family photographs, quotes from those who know him and typewritten excerpts in Hal’s own words. The multi- media approach to outlining Elder Eyring’s life was not the only draw however. It’s the stories of a man who is ever striving to seek the answers to his prayers, to serve, and to be an amazing father to his children.  Hal and his father were both brilliant scientists who left a huge mark on the world around them. I learned so many interesting things about Hal that I didn’t know before.

As I carried I Will Lead You Along with me,  it drew a lot of attention wherever I went. People often asked to look through it. I highly recommend it because of the example Hal’s life set and the deep lessons that are embedded about seeking the Lord’s guidance in all things and going where he want you to go.  An absolutely beautiful and enlightening read.

Robert I. Eaton began serving as president of the Washington Federal Way Mission in summer 2013. Prior to that, he was a professor of religious education at Brigham Young University-Idaho. He is a graduate of BYU and of Stanford Law School. He and his wife, Diane, are the parents of four children.

Henry J. Eyring graduated from Brigham Young University, earning a bachelor’s degree in geology and graduate degrees in business administration and law. He is the advancement vice president of BYU-Idaho and has served as director of the BYU MBA program. He also served as president of the Japan Tokyo North Mission. He and his wife, Kelly, are the parents of five children.