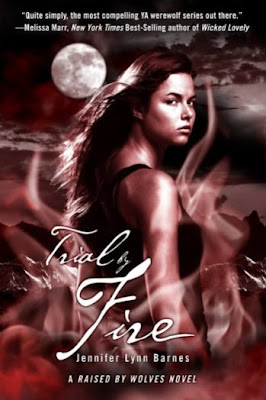 Bryn is now leader of the Cedar Ridge pack of werewolves and she’s convinced that her pack is different – it’s democratic and fair. Then Bryn finds a battered teenage Were, Connor, bleeding on her front porch. He begs Bryn to protect him from an abusive leader; Bryn takes him into her pack.

But Bryn’s Were partner Chase doesn’t trust the new boy, and the more time she spends helping Connor, the more aggressive Chase becomes. Bryn is not sure if it’s jealousy, or Were possessiveness but for the first time she starts to feel suffocated by the bond she and Chase share.

Filled with action, unlikely allies, and deadly conspiracies, Trial by Fire will change Bryn forever. She is soon to realise that to lead a pack of werewolves, she must give in to her animal instincts and become a little less human. And as hard as it’s going to be, Bryn is going to have to do it alone.

There can only be one alpha.

Trial by Fire, installment two of the Raised by Wolves series begins with Bryn as the new Alpha of the small but strong Cedar Ridge Pack. Bryn is very unusual, because not only is she female, but she is a human and her pack is werewolf. Things become complicated for the new Alpha when a foreign wolf, Lucas stumbles across the border and lands on her doorstep asking for refuge. He’s badly wounded, having been abused by his captors, but Bryn is torn between having compassion on the rogue wolf and protecting her pack from the consequences that will occur if she allows him to stay. Werewolf politics won’t allow Bryn to rely on Callum anymore for advice. And, her main rival Shay of the Snake Bend Pack is testing the limits of territory borders plus claiming ownership of the rogue wolf. Will Bryn be able to maintain her position as Alpha when it seems several members of the Council are just waiting to see her fail? What about the new added threat which is so unlike anything she has ever faced before…a coven of psychics.

What I really love about this series is the driven, focused plot centered around the mentality of a pack of werewolves. The writing gives readers a chance to really step in and feel what the dynamics inside the group. You feel like you are a part of the pack. You hear the inner dialogue and feel what Devon, Lake, Maddy and the others might feel. In Trial by Fire, we also get a lot of interesting back history on Ali, Bryn’s foster mother, and we see Bryn pushing back against Ali’s desire to exercise authority over Bryn as she has in the past. Bryn is definitely the Alpha now and won’t take much from anyone who steps up to challenge her.

Jennifer Lynn Barnes creates characters that will stick with you long after you’re done reading. They are well developed and each unique in their own right. Devon is one of my very favorites with his funny sense of humor and undying loyalty to Bryn. (Now we just need to find him someone special in book three!) I also wish we would see more of Chase and Bryn together, but I understand she is so busy fighting for her pack there’s not a whole lot of time for romance. This is an intriguing werewolf series which is unique and well thought out by the author. I’m curious to see where the series goes from here as it seems Bryn has faced so much opposition already! Thanks so much to EgmontUSA for the early chance to read book two. Learn more and view the new book trailer by visiting Jennifer Lynn Barnes website.

Content: Abuse and violence. Recommended for readers 16 and older.