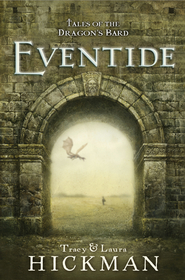 Eventide (Tales of the Dragon’s Bard #1)
by Tracy and Laura Hickman
Hardcover, 320 pages
Published June 5, 2012
by Shadow Mountain
ISBN: 1609088972
Book Source: Publisher
4 Stars
Summary from Goodreads: Jarod Klum was trapped in his small life in the small village of Eventide and saw no means of escape. He would never be worthy of the woman of his dreams, never achieve great deeds of valor and never be remembered in song or story. He would spend every day very much the same as the days of his apprenticeship in the village counting house tallying other people’s coins acquired from other people’s wealth garnered from other people’s deeds until his never-exceptional life came to a never-exceptional end.
It wasn’t that he was without dreams. He dreamed them every night; of rescuing the imperiled Caprice Morgan from some terrible rampaging monster or of protecting the virtuous Caprice Morgan from marauding pirates who had somehow come up the river or of returning from a great Quest beyond the village boundaries laden with treasure that he could lay at the feet of the appreciative Caprice Morgan.
But each morning he awoke in his straw bed and knew he was just Jarod Klum
Until, that is, the coming of the Dragon’s Bard.
Edvard the Just … Dragon’s Bard to the Dragonking Khrag … blew into Eventide on a late winter wind that some said he created out of his own seemingly inexhaustible supply of words. He swept up Jason with his words and turned the apprentice’s world upside down.
The Dragon’s Bard convinced Jarod to win his fair Caprice through ‘heroic deeds of a more manageable scale’ – setting Jarod on a course of misadventures that turns the town on its head. Jarod’s single-minded pursuit of his greatest wish – even if it is a broken one – escalates until the only thing left for him to do is to become a dragonslayer and save the town from a ferocious, legendary monster that everyone fears but no one has ever seen.
‘Eventide’ is brought to life through the stories of the interweaving lives of its citizen characters, their follies, joys, tragedies and triumphs on a scale of life to which we can all relate. In the end, it is a visit to a place where we ourselves would like to settle down and live out our lives as we should.
‘Eventide’ centers around Jarod Klum – a young apprentice to his father’s counting house – and his heart-sore pursuit of his beloved Caprice Morgan, one of three down-on-their-luck sisters who are struggling to keep a broken wishing well supplied with wishes. His attempts at heroics more often result in calamity and raise the ire of nearly the entire town, but with the help of the DragonBard, the kind friendship of the dwarven smithy and the guidance of a farmer with a mysterious past, Jarod will be victorious – even if it means luring a dragon into the town.
Cathy’s Review: Edvard the Just is a humble Dragon’s Bard, one day he was captured by a Dragon King, Khrag, and taken to his lair. Just as the dragon was about to eat him, Edvard mentioned that he could tell the dragon stories. Khrag just happens to love to hear stories and was more than willing to allow Edvard to live to hear those stories. But, Edvard runs out of stories to tell eventually, as we all would, and Khrag can’t eat him, because he’s very skinny from telling the dragon stories for such a long time. Edvard convinces Khrag that he can go and find him some stories from the countryside and Khrag, desperate for more stories agrees to allow Edvard to go. Edvard starts his journey in Eventide a small town where everyone knows everyone else’s business, it’s a town plagued with pixies and full of crazy characters. Jarod Klum is a young man with a dream, a dream of winning his love…Caprice Morgan. Caprice is a wish-woman, one of three sisters in charge of the town’s broken wishing well, worried about her widowed and heartbroken father. There are also gnomes, a centaur farmer with a secret, and a Gossip Fairy and a Priest with no idea which of the Gods the townspeople want him to help them worship. This crazy cast of characters will keep you laughing!
I had kind of a hard time getting into this book. I’m not really sure why, maybe part of it is just that it’s kind of hard to tell whose point of view you are hearing the story from. You would kind of think it would mostly be from Edvard the Just, but he’s a pretty zany character by himself, and it’s pretty funny what the other characters think about him. But there are a lot of characters in this book and sometimes the point of view is from one and sometimes it’s from another one. Anyway, by the time I had gotten halfway into the book, I was really enjoying it. The characters are hilarious and they are very good at getting themselves into really funny sticky situations. I gave this book 4 stars because I did end up liking the plot and I can’t wait to see what Edvard does next!
Content: Clean

About the author: Tracy and Laura Hickman have been writing science fiction and fantasy professionally for over a quarter of a century. Tracy is the New York Times Best-selling author of ‘Dragonlance’, ‘The Death Gate Cycle’ and ‘Dragonships’ (with Margaret Weis) as well as the upcoming ‘Drakis’ trilogy and ‘The Immortals.’ Laura is the author of ‘The Bronze Canticles Trilogy’ and the original ‘Ravenloft’ adventure game (with Tracy).
Learn more about authors Tracy and Laura Hickman: Goodreads/ Website/ facebook/ Blog