Posts Categorized: To Dance in Liradon

Fire and Ice is happy to spotlight author Adrienne Clarke today. She has offered us some question answers as well as an international ebook giveaway so read on…

What are your five favorite all-time books? 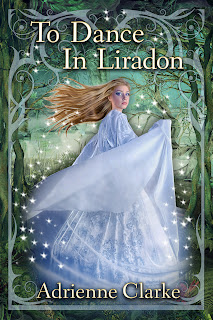 Author Bio: I think I became a writer because the world inside my head was so real and vivid, sometimes more so than the outside world. In some sense I have lived parallel lives, present in my real and imaginary lives in different ways. Because much of my childhood was spent searching for faeries or reading about them, it is natural that my work would encompass faerie tale themes and other magical elements. In the words of Tennessee Williams, forget reality, give me magic!

Adrienne has previously published short stories in The Storyteller, Beginnings Magazine, New Plains Review, and in the e-zines A Fly in Amber, Grim Graffiti, Les Bonnes Fees, The Altruist, The Devilfish Review, and Rose Red Review. Her short story, Falling was awarded second place in the 2008 Alice Munro short fiction contest. To Dance in Liradon is her first published novel.

An avid reader of fairy tales and other magical stories, a thread of the mysterious or unexpected runs through all of her work. When she’s not writing Adrienne can be found searching for faeries along with her daughters Callista and Juliet.

Learn more on her Website/ Facebook/ Goodreads
Description of To Dance in Liradon from Amazon.com: Seventeen-year-old Brigid O’Flynn is an outcast. A chance encounter with the Faerie Queen left her tainted in the eyes of the villagers, who blame the Faerie for the village’s missing women and children. Desperate to win the village’s acceptance, Brigid agrees to marry her childhood friend: Serious, hardworking, Connell Mackenna. But when Connell disappears before their wedding, Brigid’s hopes are shattered. Blamed for her fiancé’s death, Brigid fears she will suffer the same fate as the other village outcasts, the mysterious Willow Women. Lured into Faerie by their inhuman lovers, and cast out weak and broken, the Willow Women spend their lives searching for the way back into Faerie. When Connell suddenly reappears, Brigid is overjoyed, but everything is not as it seems. Consumed by his desire for beauty and celebration, Connell abandons his responsibilities, and Brigid soon finds herself drawn into a passionate, dangerous world of two.

When Brigid discovers the truth behind Connell’s transformation she’s forced to choose between two men and two worlds. Brigid’s struggle leads her into glittering, ruthless Faerie, where she must rescue her true love from a terrible sacrifice or lose him forever.

The Giveaway: We have one ecopy of To Dance in Liradon to giveaway internationally. To enter simply comment below. Giveaway ends Monday. Good luck!