Posts Categorized: the upside of down 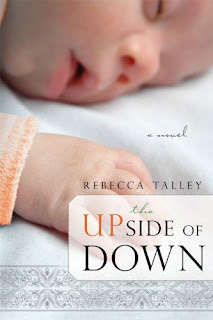 “Hmmm,” the doctor muttered.
Natalie wrinkled her forehead, almost afraid to ask, and said, “What does that mean?”
“You do know you’re pregnant, right?”
Her breath caught in her throat. “Excuse me?”
“You’re pregnant.”
Her heartbeat thundered in her ears. “I’m what?”

Natalie Drake certainly has her hands full raising a large family, dealing with her difficult mother, and maintaining a relationship with her rebellious teenager. Just when things seem to be going smoothly, she finds out another unexpected surprise–she’s going to have a baby. Faced with so many challenges, Natalie must learn to trust in a plan that isn’t what she imagined and discover that every situation has an upside.

Rebecca Talley once again carefully crafts together a touching and heartfelt story that is sure to inspire you. With true-to-life characters and situations, The Upside of Down will reignite your faith and remind you of the importance of family.

To enter to win The Upside of Down simply comment below. Giveaway ends February 25, 2011 and is open internationally.

My Gift by Rebecca Talley, author of The Upside of Down

You may not agree with her politics, but Sarah Palin and her son, Trig, have raised awareness about Down syndrome, the most common chromosomal abnormality named after Dr. John Langdon Down who first recognized common characteristics and termed it as a condition. Will Sarah Palin’s public life combat some of the common misconceptions about Down syndrome? Will it help people to better empathize with the 350,000 Americans diagnosed with it, and their families? Time will tell.

Each year about 5000 babies are born with an extra 21st chromosome. Shortly after fertilization, an egg begins to divide and change. Normally, each person has 23 pairs of chromosomes resulting in a total of 46. Individuals receive one chromosome per pair from the father and one from the mother. In the case of Trisomy 21, or Down syndrome, a developing egg may have divided incorrectly or something else caused it to receive extra genetic material on the 21st chromosome. The result is 47 chromosomes instead of the normal 46. This extra genetic material affects individuals in various ways and much is still unknown about which genes are actually replicated. The chance of it happening increases with maternal age. However, most births are to women under age 35.

An article, “Prenatal Test Puts Down Syndrome in Hard Focus,” by Amy Harmon in the New York Times, May 9, 2007, cites research that 90 percent of all women who receive a pre-natal diagnosis of Down syndrome choose to terminate the pregnancy. 90 percent. Why? I believe it’s because there are still so many misconceptions about Down syndrome. After the announcement of Sarah Palin’s candidacy in 2008, a commenter on a blog blamed Palin for causing her son’s Down syndrome because she didn’t receive adequate pre-natal care. DS is a genetic condition and has nothing to do with pre-natal care, yet this misconception survives.

People still erroneously believe that children with Down syndrome cannot be educated. I personally know a student with DS who was on the honor roll at our middle school. Another misconception is that people with DS all function similarly and can only do certain things. People like to place them in a “box” and only have certain expectations for them. Again, I know of a woman with DS who works on the Olympic Committee and speaks three languages and Chris Burke starred in the television series Life Goes On. People with DS play instruments, act in plays, sing, swim, and have talents like everyone else. 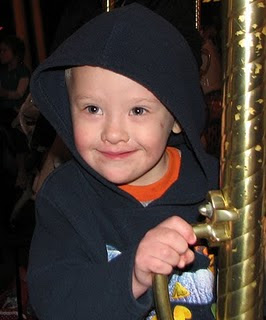 e long-held beliefs. I know I was completely ignorant when my son was diagnosed shortly after his birth. I expected him to be a blob. Was I ever wrong. He is most certainly not a blob. He constantly keeps me chasing after him and trying to stay a step ahead of him, though I always seem to be two steps behind him. He has his own distinct personality and has definite likes and dislikes. Though he’s generally happy, he can throw a tantrum just like any other four-year-old old when he doesn’t get his way. He’s a tease and loves to torture his older sister. He loves to “play” the piano and as soon as he hears the pianist begin at church, he raises his hand to “lead” the music. He performs for anyone who will watch. His favorite song is Head, Shoulders, Knees and Toes and he will do the actions, always making sure he has an audience. He can set the DVR to record his favorite TV shows, get on the internet and find his favorite websites, and unlock cell phones to place calls (most recently to 911).

Does he have challenges? Yes. But, in a sense, don’t we all have challenges? He may have to work harder to learn to read, but I don’t always understand, nor can I recall, what I’ve read in my scriptures and need to constantly reread and supplement my scripture study. He may have challenges expressing his feelings, but after all these years, I express my feelings far too frequently because I still haven’t learned to be patient. He doesn’t say many words, but I sure have to work hard to bridle my tongue especially when I think someone deserves a good tongue-lashing. He might not understand his own needs at times or the needs of someone else, but I rarely think about others’ feelings because I’m not very compassionate. He may never marry nor have children of his own, but I have yet to become the kind of wife and mother I should be. We all have our struggles, his are just more apparent. 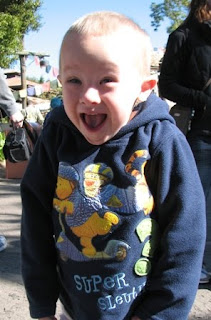 I often wonder why God chose me to raise such a son. I feel so unworthy to be his mother. He inspires me to be a better person and to see beyond physical limitations. He teaches me that life is to be savored, not rushed. The little things I’ve taken for granted with my other children are now so much sweeter with him because he’s worked so hard to achieve them. I’ve learned that the journey is as important as the destination.

It’s like Christmas every day with him; he’s a gift I can enjoy repeatedly. Of course, all children are gifts, but the world seems to shun that gift when it’s wrapped a little differently.

Has Sarah Palin changed attitudes? I hope so. The world needs to realize that every life matters, every person deserves a right to live, and every child deserves respect even if he or she has an extra chromosome. After all, under the wrapping, we’re all the same to God.

To learn more about author Rebecca Talley visit her website at http://www.rebeccatalleywrites.blogspot.com/ and be sure to enter to win a copy of her book The Upside of Down in the post above.