Anyone who knows me well knows of my love for two things…books and Maggie Stiefvater‘s writing. I first discovered her writing with the Shiver series in which I bawled like a baby, and then moved on to the Bones of Faerie series which fit my obsession for all things fae. Later I picked up  The Scorpio Races at BEA somewhat dubiously, since it was a standalone about sea horses ( not the nice little harmless ones… no, these are flesh eating horses that come out of the sea) and once again cried my eyes out. So imagine it was no surprise when I squealed like a little girl after I got a copy of The Raven Boys at ALA and saw Maggie walking in the exhibit hall.
Could I let her pass without making a fool of myself…oh no. Meeting her in a room full of people at the Scholastic Party in NYC was not enough for me…
so I had to or wave her down in Anaheim to simply blurt out “you rock.” But this is oh so different from what happened last night at The King’s English.
The awesomesauce Rachel from TKE set up a cozy little pre-signing blogger meeting with a few of us and THE Maggie Stiefvater. In which we got to sit down and ask her whatever we wanted, armed with our name tags, cameras, front row tickets to the signing and the giddy smiles only book nerds can have. SO what did we talk about…?
Of course we wanted to know about Maggie’s passion, the Mustang Gansey drives in The Raven Boys. Stiefvater said she spent a lot of time on a flatbed as a child with a father who liked to put back together cars that literally had to be towed in pieces. Her dad would “fix them up then move on once he got them running.” She remembers riding in an old Jaguar with the floorboards missing and seeing the road beneath her feet, dragging animals along with them. And her love of cars has carried over into adulthood as Maggie owns her own Mustang, plus is getting her very own Rally license.
Since a fast ride is not enough, Maggie would like to own a helicopter. She’s spent time on tour stops trying to squeeze a helicopter ride into her schedule–perhaps to spot ley lines or the corpse road she described in the Raven Cycle Series. (Her agent isn’t so hot on the idea, ’cause you know she can’t be late to her events) Speaking of agents, hers is David Levathin who will also be coming to The King’s English on October 15th at 7 PM.
But, I digress. We learned Maggie’s favorite book that she has written is The Scorpio Races (which was originally titled Red As The Sea)  and one of her favorite recent reads is When Things Come Back  by Corey Whaley.
An author she absolutely worships? Susan Cooper, whose Dark is Rising series brought Welsh mythology into the modern day. Maggie did a great impression of how star struck and stunned she was to meet Susan Cooper and offer her a hug (which is big coming from a non-hugger Maggie) We were all laughing out loud at the many faces and dramatic antics of Maggie. If you ever have a chance to see her in person, YOU MUST GO.
I asked Maggie about her Bones of Faerie series and if we will get another book….the answer is YES! Requiem (tentatively titled) will come out in Spring of 2014. She’s currently working on The Raven Boys book number 2 which she just cut 25,000 words from. Interestingly enough she cut 90,000 words from Forever.
Her solution to writer’s block is very loud music and deleting. There’s a special folder on her computer labeled “Outtakes” where all the deleted scenes go. (wouldn’t we ALL like to get our hands on that folder?)
The Raven Boys is the first book in a  four book series. She says she’s always wanted to write a four book series “since she was a little maggot.” The plot brings Welsh mythology into her home state of Virginia. (It is one of my favorite reads of 2012 -creepy, atmospheric and magical) Book one features yet another hard core boy like Cole in Forever–a damaged soul with a past.
This was something I was interested in–where does Maggie get these characters? So I asked.
She pulls them from her own past experience and friend’s lives, especially from her college years which were rough. During that time she lost some of her hearing as a professional bag pipe player.
Maggie’s love of music comes across in her book trailers which she composes the score for and draws herself using acrylic and colored pencil. She is also famous for using a black Sharpie to decorate her guitars.
Her bestselling Shiver series came from a desire to write a bittersweet love story that would make readers cry (she got me on that one!) It was supposed to be about wolves, NOT to be confused with were wolves which she hates. She attributes lots to her critique partners, Tessa Gratton, Brenna Yovanoff
who “she couldn’t do without.” The three of them collaborated on the book The Curiosities.
So, in short…or long, did this event get chocked up as my all-time favorite at The King’s English? Why yes–yes, it did.
Thanks again to the staff at The King’s English for treating us like royalty.
And to Maggie…THIS made my night 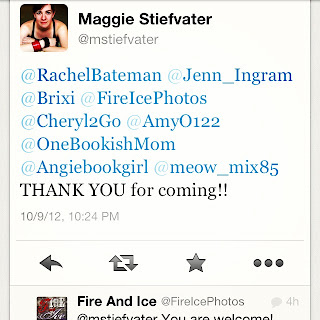 If you would like a signed copy of Maggie’s books, check here at the King’s English site to order.
I’m spreading my Maggie Stiefvater love far and wide and am giving away an ARC of The Scorpio Races and paperback copy of Shiver. US residents 18 or older enter below. a Rafflecopter giveaway