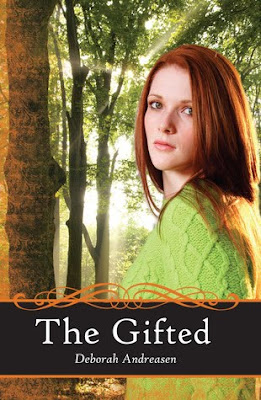 Pyper just wants a normal life. But ever since the day she died, she’s been able to control objects with her mind. What she can’t control is a mother who fears Pyper’s ability and the possibility of it being discovered. Pyper only finds solace in her friend and brother, Baler. When Pyper moves to yet another new school, she meets Kael, who takes an immediate interest in her. He knows her secret, and he’s got one for her: he needs her help saving the Fae people. The problem is, Pyper doesn’t believe in Faeries. But when her brother is abducted, Pyper doesn’t have much choice. Can she really save a race she doesn’t believe exists? Can she rescue her brother? And can she accept her second chance at life?

The first thing that grabbed me about The Gifted is how swiftly the writing pulls you in and holds you. Each page is tight and creatively crafted. Pyper, a red haired green eyed fireball, has been forced to move states over and over because of the impact of her strange abilities. As the book opens we find her in a new shcool and once again, two girls have singled her out as a freak. She has a little bit of trouble controlling her temper, and those on the receiving end meet with paranormal circumstances. Watching all of this unfold is Kael, popular gorgeous classmate who doesn’t seem at all phased by Pyper’s blatant efforts to completely ignore his advances. He tries and eventually succeeds in winning a tiny bit of Pyper’s trust. Neither he nor the two mean girls are at all what they seem.

Pyper has always had her brother Baler to confide in and lean on, but as time wears on he seems to be slipping further and further away to his new group of friends. Little do either of them know just how influential and life changing their choice in peers will become. Brother and sister have yet to meet the battle they were meant to fight. Andreasen takes faerie lore and puts in a fantastical paranormal twist which will appeal to Young Adults. The Gifted is a clean read I would gladly let my children read and once you pick it up you’ll stay with the plot until the end. I loved the brother and sister loyalty portrayed as well as the kind love Kael shows. It’s endearing to see such genuinely nice YA characters.

Author Deborah Andreasen has kindly offered up one copy of her book to our readers at Fire and Ice. To enter to win simply click and fill out this form.