Only One Can Survive The Reckoning

Erin Radkey has always known the day would come when she would have to personally confront the Triad leader of the power-hungry Emporium. But she never thought it would be with a snake in her head that feeds on her energy. Or that she’d be in the company of an uncertain ally who might turn on her at any moment.

The stakes are high as new intel uncovers a startling Emporium plot that will catapult the entire world into war. Erin is determined to save not only the mortals but also her friends—even if it means sacrificing herself and her newfound love for Ritter Langton.

Ritter is just as determined to save Erin and prevent what would usher in the most bloody century the world has ever known, but even he might not recognize the person she becomes.

Every day the enemy grows stronger. There will be no second chance.

I started firing. My third man fell and Mari’s second before the group turned in our direction. Two men at the back dropped from Ritter and Stella’s fire, followed by two more. Nine down. They opened fire. The rat-a-tat-tat of their automatic weapons sliced through the stillness of the night. We had to hurry. Mari crouched behind the car, while I went over the top, using Ritter’s speed. He was already there. I landed on one rotund Hunter while bringing my trangue gun down on another. I rolled as I fell. Another turned his gun in my direction, but I was already diving away, the bullets spraying the short grass. Twisting, I came around, my foot out, kicking the gun from his hand. He slammed his fist at me, but I deflected it with my left arm and jabbed my right hand into his gut. He grunted and leaned forward into my next punch. I looked around as he fell, but I already sensed everyone was down.

“Get them into their van,” Stella said. “It won’t be long before someone comes to investigate those shots.” She grabbed a Hunter and started tugging him across the ground.

I sent my thoughts out wider, finding two more life forces slinking in our direction. They were dimmer than the average life forces, which meant they were shielded. Before I could warn the others, Desoto’s two patrolman emerged from the trees only twenty feet away. I caught a glimpse of automatic rifles before a spotlight blinded me.

“Stop,” said a voice I recognized as belonging to the Unbounded who’d found Walker asleep in the security room. “Put down those weapons.”

Unbounded. Both of them, I told the others. Mari, stay behind the car until I tell you.

Ritter, Stella, and I dropped our tranques and raised our hands as the Unbounded moved closer. I could see a red dot on Ritter’s forehead, and as there wasn’t one on Stella’s, I figured another must be on mine. Though the bullets wouldn’t kill us, we’d be out of commission long enough to lose the information we’d obtained unless Stella had already uploaded it to our servers. Worse, we’d be back in Emporium hands.

I’d rather die a true death.

Praise for The Reckoning:

I just loved the whole Saga! Well-written, completely addictive, keeps you on the edge, wanting to know what comes next! I really think the author should consider a movie or a TV series for the whole four books! For not being a SF fan, I just can say that this was AWESOME!

The fourth installment in the Unbounded series definitely lives up to the action packed books preceding it. I love the strength of Erin’s character, and the novel made for compelling reading.

The Unbounded world is a fascinating place to visit! I would recommend this series to anyone, women, men, young adults. Not overly complicated yet the author weaves an amazing tail. I can hardly wait to see what is next for the Unbounded! 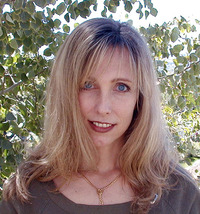 Teyla Rachel Branton grew up avidly reading science fiction and fantasy and watching Star Trek reruns with her large family. They lived on a little farm where she loved to visit the solitary cow and collect (and juggle) the eggs, usually making it back to the house with most of them intact. On that same farm she once owned thirty-three gerbils and eighteen cats, not a good mix, as it turns out. Teyla always had her nose in a book and daydreamed about someday creating her own worlds. She is now married, mostly grown up, and has seven kids, including a two-year-old, so life at her house can be very interesting (and loud), but writing keeps her sane. She thrives on the energy and daily amusement offered by her children, the semi-ordered chaos giving her a constant source of writing material. Grabbing any snatch of free time from her hectic life, Teyla writes novels, often with a child on her lap. She warns her children that if they don’t behave, they just might find themselves in her next book! She’s been known to wear pajamas all day when working on a deadline, and is often distracted enough to burn dinner. (Okay, pretty much 90% of the time.) A sign on her office door reads: DANGER. WRITER AT WORK. ENTER AT YOUR OWN RISK. She loves writing fiction and traveling, and she hopes to write and travel a lot more. She also loves shooting guns, martial arts, and belly dancing. She has worked in the publishing business for over twenty years.