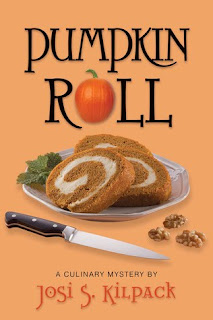 Sadie Hoffmiller is looking forward to spending her favorite baking season of the year making delicious New England recipes in Boston, Massachusetts, with her favorite leading man, Pete Cunningham, as they babysit his three young grandsons. But when the boys insist that Mrs. Wapple, the woman who lives across the street, is a witch, Sadie and Pete are anxious to distract the boys from such Halloween-induced ideas. However, it gets harder and harder to explain the strange things that keep happening, particularly after Sadie learns the eccentric Mrs. Wapple has been attacked in her home. As the unexplained occurrences escalate, Sadie finds herself embroiled in yet another mystery with life-or-death consequences. Can Sadie discover whoever—or whatever—is behind the mystery before anyone else gets hurt? Or will this be Sadie’s last case?

Don’t ask me how I have gone so long without reading one of Josi Kilpack’s culinary mysteries, but I have obviously been missing out on all the fun. Pumpkin Roll is absolutely perfect for Fall and Halloween! Set in Jamaica Plain, a small township of Boston it is close to heart of the Salem Witch Trials. Things get spooky fast for Sadie and boyfriend Pete who are on vacation together while watching Pete’s grandchildren. Between light bulbs exploding, strange faces in the window, night time visitors and the witch across the street who is always digging in her yard, Sadie is sure there’s a mystery to be unraveled. In her nosy neighbor way she offers a plate of cookies to Mrs. Wapple and is determined to figure out why she’s so strange. But danger lurks around the fence!

With mouthwatering recipes for cookies, whoopie pies, clam chowder and cinnamon twists, Pumpkin Roll is one you don’t want to read while hungry! Sadie will have you itching to bake and trying to put together all the little clues behind this who done it. I thoroughly enjoyed this book and would recommend it to all readers as a must have before Halloween. The atmospheric creepy tone is topped off with lots of comfort foods for a perfect combination. Now that I’ve discovered The Sadie Hoffmiller Culinary Mystery Series I can’t wait for Banana Split coming in Spring 2012. Thanks so much to Deseret Book for sending me Pumpkin Roll! 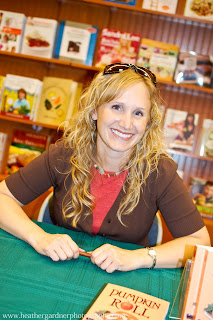 About the Author: Josi S. Kilpack hated to read until her mother handed her a copy of The Witch of Blackbird Pond when she was 13. From that day forward, she read everything she could get her hands on and accredits her writing “education” to the many novels she has “studied” since then. She began writing her first novel in 1998 and never stopped. Her novel, Sheep’s Clothing won the Whitney Award 2007 for Mystery/Suspense. Lemon Tart, the first book in the Sadie Hoffmiller Culinary Mystery series was a finalist in 2009. Her most recent book, Blackberry Crumble, is the fifth book in the Sadie Hoffmiller Culinary Mystery Series. Josi currently lives in Willard Utah with her husband, four children, one dog, and varying number of chickens.

Enter to win copy of Pumpkin Roll on Goodreads.

In conjunction with the release of Pumpkin Roll, the author, Josi S. Kilpack, and the publisher, Shadow Mountain, are sponsoring a contest for a new iPad.

To enter, leave a comment in the comment section of this blog before November 1, 2011. Winners will be announced and notified November 3rd 2011.

For additional ways to enter, go to http://www.josiskilpack.com/