Congratulations to @bellekhris for winning our handmade Infinite Days inspired necklace made in collaboration with YA author Rebecca Maizel http://fireandicereads.com/2010/08/new-infinite-days-inspired-necklace.html
Please send us your mailing address! 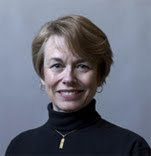 Head on over today to G. G. Vandagriff’s website “Writer in the Cranberry Tower” for an exclusive author interview with us about her book Pieces of Paris. Thanks so much for featuring our review and questions! 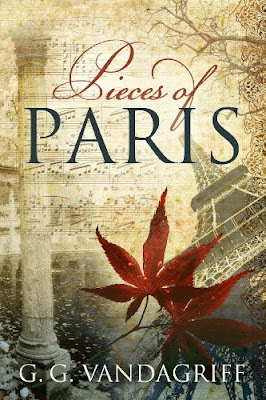 Is it possible to forget who you once were?

Annalisse and Dennis seem to be living the American dream until Annalisse’s secret past threatens to destroy their family. This skillfully crafted novel from Whitney Award winner G. G. Vandagriff explores the long-term effects of personal tragedy in haunting flashbacks of Annalisse’s former life–flashbacks that are interwoven with a passionate romance to reveal a person entirely different from the woman Dennis thought he had married. But as Annalisse struggles with long-buried memories, Dennis’s investigation of a toxic waste incident ignites the wrath of a former political ally and an industrial firm that will go to any lengths to cover up a shocking crime. Can Annalisse reconcile her turbulent past with her present life before it’s too late? And can Dennis find a way to save his family and the town they’ve called home?

This is the first book I have read by G.G. Vandagriff though I’ve met her briefly a couple of times at Authorpalooza events. So first off, special thanks to her and Shadow Mountain for letting me take a sneak peek at her newest novel for women.

Told through the eyes of a married couple and from two alternate points of view, Pieces of Paris opens with Annalisse, a woman in her twenties, living on a farm in the Ozarks. She is pregnant with her second child and suddenly finds herself being haunted by the past. Her stable life with husband Dennis, a local lawyer, begins to crumble as she can’t shake memories that come in the way of flashbacks. Meanwhile, Dennis is battling with a case which stirs up controversy and puts their family in danger. His lifelong dream of an escape to Eden and a peaceful life are threatened by Annalisse’s sudden change in behavior and the hot bed of unrest in his town. The two of them pull apart for the first time as a couple and both begin to wonder if their marriage is not at all what they wanted or expected. Can Annalisse salvage the passion and talent she once felt without losing herself to the past? Can Dennis love her as she really is?

Pieces of Paris does a masterful job of weaving a captivating story with real life issues like manic depression and the true definition of love. It’s a book that is likely to evoke strong emotions for anyone with experience with mental illness or PTSD. She pushes buttons on some hot topics: racism and environmental clean up as well as small town politics. The book has some very tough and graphic moments as Annalisse learns she has to move through the pain or her past in order to overcome it. However, in the end the overall message is one of hope and finding a center that can’t be lost. It was evident from the detail in Pieces of Paris that Ms. Vandagriff is a highly intelligent, cultured person with a deep knowledge of psychology. (We’re excited to interview her soon!) 25 years in the making, Pieces of Paris is a glimpse of her talent. Visit her website at http://ggvandagriffblog.com/ to learn about her other published works and upcoming events.

Leave a comment below for a chance to win a 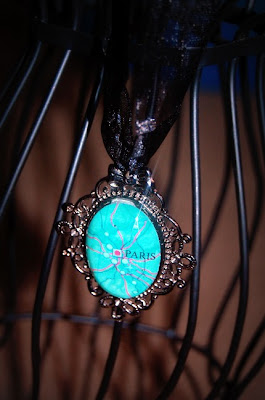 Paris necklace from our shop.