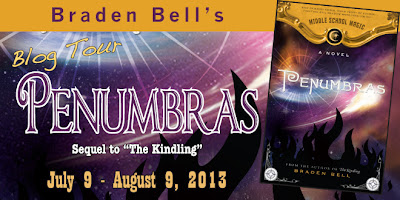 Fire and Ice is thrilled to be today’s blog tour stop for Braden Bell’s Penumbras, sequel to The Kindling.

In fact, he only wanted to go to sleep and possibly dream about Melanie Stephens.

But explosions had a funny way of happening when Conner and his friends were around.

Conner Dell wants to be good–he really does. But he is terrified that he might be turning into a Darkhand, especially when new powers start to surface. What’s worse, the Stalker is following Conner, but no one else seems to be able to see him. The Magi think he might be hallucinating, the guilt of what happened in the Shadowbox keeps weighing on him, and his relationship with Melanie Stephens is complicating things. Even for a Magi, Conner knows his life is anything but normal.

Review: It’s been quite a while since I read book one, The Kindling, but if there’s one thing this series has, it’s “stick-to-it-iveness.” The characters and plot are well crafted and so unique I was able to pick right back up with book two and remember what was going on. It’s also a book that once you put it down it stays with you.

Conner and his twin sister Lexa are right in the midst of a battle between light and dark, good and evil, but this time around there is a blurring of the lines– shades of gray that are being fought on a personal battlefield deep within the soul. The team of brother  & sister, plus their sidekicks,  Pilaf and Melanie must retreat to Mockingbird Cottage ( don’t you love the name) to train a little harder and protect themselves from the shadows and dark hand forces which seek to destroy them from the inside out.

Somewhere along the way Conner and Melanie begin to develop feelings for each other and the sweet middle school magic of first love starts to soar. Lexa won’t have it–she begins to feel jealous, like a third wheel and we really see her drama queen side start to come out. She is real, someone you can picture walking right out of your middle school cliques of friends, always thinking the world must revolved around her next starring role. And Pilaf…what can we say? I’m pretty sure he’s somewhere on the autism spectrum, as he is brilliant but admits he can’t read facial clues or nuances in social interactions. Thank you to Braden for painting imperfect people who are dealing with those trials and character flaws we all experience.

What I loved is that this is a book that explores the trauma related to abuse in a easy to swallow yet understandable way for children. Conner is much more that he things he is–he has divine heritage and the supernatural assistance of workers of light to assist him in fighting those that work against him. While he is facing deep inner conflicts as a result of his time with Lady Nightwing, the evil mastermind of darkness, he also has the aid of light to help heal his soul. There is so much more than magic going on in this book!
Contentwise there was a little too much action for me in the ending scenes (the series really needs to be made into a movie…it would be awesome) and some moderate violence involving a knife and other weapons. But, I think it’s one your middle school children will enjoy.

I recommend it for ages 12 and up as well as adults.

There is much about Penumbras that I will never forget! Wonderful world building, colorful characters, rich descriptions and tons of action. Great job Braden!

EXCERPT:
CHAPTER ONE
SHADOW PUPPETS
Conner Dell didn’t mean to blow up the school bus.
Or the bathrooms.
In fact, he only wanted to go to sleep and possibly dream about Melanie Stephens.
But explosions had a funny way of happening when Conner and his friends were around.
It all started on the annual seventh grade science trip to the Sea Lab at Dauphin Island, Alabama. Fifty-four thirteen-year-olds on a five-day field trip. What could go wrong?
Especially when three of them happened to be Magi.
#
For a fraction of a second, Conner thought he saw shadows slithering along the base of the cinderblock walls. Tensing, he blinked and looked again.
Nothing. He was alone in the darkness of his dorm room.
Well, except for his friend and fieldtrip roommate, Pilaf.
Across the room, Pilaf disturbed the darkness by turning his flashlight on and digging through a giant floral print suitcase. Fishing a book out, Pilaf hunched over, tucked the flashlight under his chin, and read.
“What are you reading?” Conner asked.
“Sorry. Did I wake you up?” Pilaf squeaked. “I couldn’t sleep. I guess I slept too much on the bus.”
“No worries.” Conner burrowed into his sleeping bag. He didn’t like messing with sheets on these trips. The springs of the ancient bed creaked beneath him. “I’m not sleepy either.” Lexa? Can you hear me? Conner reached out in his thoughts, wondering if his twin sister was awake in her room on the girls’s floor. Head-talking was a cool benefit of being one of the Magi—a secret group of warriors who used the power of Light to battle evil.
No answer from Lexa. Her allergy medicine must have knocked her out.
Melanie? He tried Lexa’s best friend, Melanie Stephens—also one of the Magi-in-training. Conner listened for her response, trying to ignore the backflip in his chest that came when he thought of her. No answer. Melanie had taken something for motion sickness on the bus. She must be knocked out too.
Conner jerked up as something skittered across the ceiling right above him. No doubt this time. He grabbed his own flashlight, raking the beam across the ceiling tiles as someone whispered his name.
Coooonnerrrrrr.
“What?” Conner pointed his flashlight at Pilaf, who looked up from his book, blinking behind his thick glasses. Pilaf’s blinks always reminded Conner of the way a light on a computer blinked when it processed data.
“What?” Pilaf squinted back at him.
“Why did you call me?” Conner asked.
“I didn’t.” Pilaf looked down at his book.
On edge now, Conner lay back down, scanning the room for more shadowy movement, his fingers ready to snap his flashlight back on at any second.
Co-n-n-e-r-r-r-r-r-r D-e-l-l-l-l-l.
A whispered, hissing sort of growl sounded in his head as a flicker of movement caught his eye. He whipped his head around in time to see a shadowy tail vanish under Pilaf’s bed. Flipping his flashlight on, he investigated the space under the metal frame.
Nothing there.
“What are you doing, Conner?” Pilaf managed to blink and stare at the same time.
Trying to protect you from slithery shadow monsters that could slurp your soul like a slushie, Conner thought. How could he keep the flashlight on without alarming Pilaf? Out loud, he said, “Uh, it’s a game. Flashlight tag. You’re it.” He shined the flashlight at Pilaf.
“How do you play?”
“Well . . . one person’s it and he shines a flashlight all over the room.”
“That’s all?” Pilaf blinked until Conner wondered if he was broadcasting the telephone book in Morse code. “It seems kind of pointless.”
“Uh, yeah.” Conner said. “You’re right. Lame. How about shadow puppets?” He slipped his hand in front of the flashlight, wiggling his fingers until the shadow resembled a horse.
“Cool!” Pilaf shouted.
A knock at the door interrupted them and a tired-looking science teacher poked his head in, glaring beneath tousled red hair. “What’s going on in here?”
“Sorry, Mr. Keller,” Pilaf said. “We slept on the bus ride, so we’re not tired. Conner’s making shadows with his hands. Look, a horse!”
“Neeeiiiiggghhh.” Conner threw in sound effects as a special feature.
Apparently unimpressed with great art, Mr. Keller frowned. “Get some sleep. We have a full day tomorrow.”
“Yes, sir.” Conner swallowed his depression at the thought of a five-day science class. Five days of plankton, ocean salinity, salt marshes, and beach ecology. Five days of science, 24/7. At least they were close to the beach. That might be fun.
“Do another one,” Pilaf whispered as the sound of Mr. Keller’s footsteps retreated down the hall.
“Okay, but be quiet this time.” Conner opened his fingers, making a snake’s mouth, complete with a flickering tongue.
It seemed so real that Conner thought he heard a hiss. Unsettled, he dropped his hands, but the hissing noise continued, twisting into words.
Co-n-n-e-r-r-r-r-r-r D-e-l-l-l-l-l—
Trying to squash the sound, Conner raised his voice. “Here’s another one.” He cupped his hands on top of each other, stuck his thumb up, and opened his fingers slightly.
“Wow!” Pilaf yelled. “A wolf!” He giggled as Conner opened the mouth and growled. “Little pig, little pig let me come in.” Conner prayed that none of the other seventh-grade boys heard he’d been doing Three Little Pigs shadow plays. That would not be cool.
Co-n-n-e-r-r-r-r-r-r D-e-l-l-l-l-l—
The weird voice came louder. Conner dropped his hands away from the flashlight.
The wolf head stayed there.
Fighting panic, Conner switched the flashlight off, but the wolf head remained, darker than the darkest shadows on the wall.
It stretched and grew bigger, becoming life-sized within seconds. It turned and stared at Conner, a three-dimensional head sticking out of the wall like some kind of freaky hunting souvenir.
The wolf growled, then jumped off the wall, and sailed across the room toward Conner. 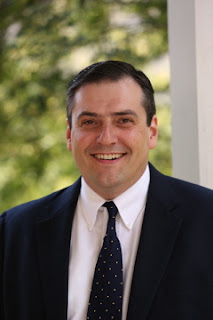 Author Bio: Braden Bell grew up in Farmington, Utah and graduated from Davis High School. He earned bachelor’s and master’s degrees in theatre from Brigham Young University and a Ph.D. in educational theatre from New York University. He and his wife, Meredith live  with their five children on a quiet, wooded lot outside of Nashville, Tennessee, where he teaches theatre and music at a private school. An experienced performer, Braden enjoys singing, acting, reading, gardening, and long walks with the dog.
Find out more on the Penumbras Website/ Author Facebook/ Blog and Twitter
Purchase links: Braden’s website / Amazon / Barnes and Noble
Note: He will be selling both Penumbras and The Kindling through my website for a steep discount–$9.99 (plus s/h)

The Giveaway: In connection to the Penumbras Blog Tour, author Braden Bell is giving away a $50 Amazon Gift Card. To enter, fill out the rafflecopter form below.
a Rafflecopter giveaway