I am happy to be hosting a spot on the THE GUARDIANS OF TRUTH by Barry Finlay Blog Tour hosted by Rockstar Book Tours. 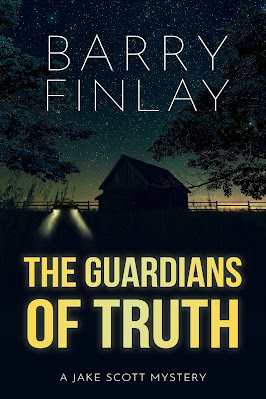 Title: THE GUARDIANS OF TRUTH

He’s a refreshingly different hero, definitely not young and six-packed, but…

Retired reporter Jake Scott knows a thing or two about exposing the truth and unmasking frauds. Unfortunately, he walks a fine line between helping and interfering in investigations. Homicide Detective Dani Perez, with whom Jake has a shaky personal relationship, doesn’t always appreciate it, but he can’t seem to help himself.

The affable and shrewd, yet old fashioned, Jake is hot on the trail of a case when a body discovered in a bog and three suspects lead him to the doorstep of The Guardians of Truth, a shady organization with an opportunistic and charismatic leader. While the organization purports to offer everlasting support to its followers, Jake discovers just the opposite is true.

Now Jake and an insider, Cassie Wright, want to expose the leader and protect his followers from financial ruin or worse. Their harrowing quest isn’t without peril, as one will disappear and the other will be forced to fight for survival.

If you like your heroes to be, well, like you and I, the second book in the Jake Scott Mystery Series will draw you in and have you wishing you could dive in to help. 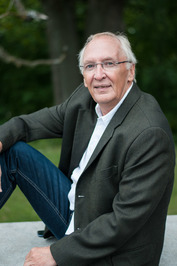 In 2009, Barry Finlay went up a mountain as an accountant and came down as a philanthropist. After over thirty years in various financial roles with the Canadian federal government, he took his life in a different direction and climbed Africa’s Mount Kilimanjaro at age 60 with his son Chris. The climb and their fundraising efforts to help kids in Tanzania changed his life in a number of ways, including the start of his writing journey. He wrote his first book, the popular Kilimanjaro and Beyond: A Life-Changing Journey with his son in 2014.

He followed that up with the hilarious travel memoir, I Guess We Missed The Boat, and then The Marcie Kane Thriller Collection was born. Barry completed his debut fiction book, and the first in the series, The Vanishing Wife, in 2014. His next novel, A Perilous Question, was released in May 2016. His political thriller, Remote Access, was released in April 2018. That was followed by a novella, Never So Alone, in May 2019. The fifth book in the Marcie Kane Thriller Collection, The Burden of Darkness, was released in May 2020.

Each of the thrillers has a socially relevant theme, and has achieved Kindle bestseller status.

Now, he’s introducing a new character named Jake Scott in what will undoubtedly be a new mystery series. The first in the series, Searching For Truth, was released in 2021.

Barry’s books have received multiple literary awards and he was named to the Authors Show’s list of “50 Great Writers You Should Be Reading” in 2012. In 2013, he received the Queen Elizabeth Diamond Jubilee medal for his philanthropic work in Africa. He lives in Ottawa, Canada with his wife Evelyn.

2 winners will receive an eBook of THE GUARDIANS OF TRUTH, International.