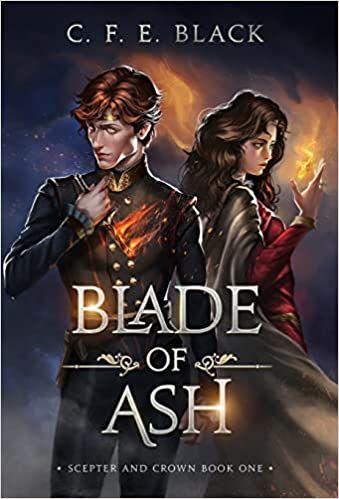 The only way to beat death is to chase it.
⠀
Newly crowned, Red blames one person for his father’s murder: the secret sorceress sworn to protect the king.
⠀
Alyana Barron, Royal Sorcerer to the throne of Tandera, fears her magic is weakening.
⠀
When Red is cursed, his life entwines with Aly’s in ways neither of them expected. Together, they chase after a cure that will heal the king and restore her magic, but the closer they get to a cure, the nearer they step toward death, for the path to the cure is as dangerous as the curse itself.
⠀
Blade of Ash is the first in a new, epic YA fantasy series perfect for fans of enemies-to-lovers romance packed full of royal intrigue, legends, and plenty of ballgowns. If you like female bodyguards and forced proximity with life-and-death stakes... this story is for you!

Red has inherited the kingdom after his father is killed by a curse. His royal protector Aly has remained invisible in his life until now, and Red feels she is to blame. There are new responsibilities to take on, the king and sorceress are grieving, and both of their magic seems to be weakening. The source of the magic is a truthwell. Lies and distorted truth weakens the power while truth feeds it. I loved this unique system. There were several moments through the storyline where both Red and Aly have to learn to put aside what their brain is telling them to instead rely on hope, and on the magic they can strengthen by working together.

Blade of Ash is a clean YA fantasy adventure with an underlying theme of putting aside fear and relying on another. There were moments in the world building that reminded me of the Shadow and Bone trilogy by Leigh Bardugo. I’m a fan and now that I know there’s a prequel, as well as a series, there’s more to add to my pile of future reads. This is a series I will be watching as it has a positive message and a wonderful set of strong characters.

Thanks to Prism Book Tours and the author for the complimentary copy for the tour.

C. F. E. Black loves to get swept away in books, both reading and writing them. When she’s not writing or chasing her son, she’s teaching high schoolers and trying her best to be a light in their lives. She lives in beautiful north Alabama with her superhero husband, sons, and fur-family. Connect with her and find free stories at http://www.cfeblack.com.