I am so excited that WHEN WE’RE THIRTY by Casey Dembowski is available now and that I get to share the news!

If you haven’t yet heard about this wonderful book, be sure to check out all the details below.

This blitz also includes a giveaway for a signed copy of the book courtesy of Casey & Rockstar Book Tours. So if you’d like a chance to win, check out the giveaway info below. 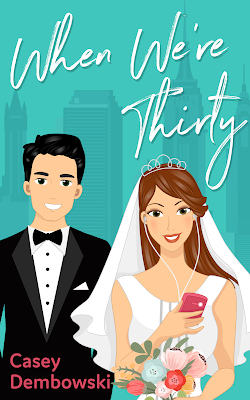 Two friends. One pact. The performance of their lives.

Hannah Abbott is stuck in a dead-end relationship and at a job she loves but that barely pays the bills. The four walls of her tiny New York City apartment have never seemed so small. She’s barely toasted her thirtieth birthday when her old college friend Will knocks on her door with an unexpected proposal.

Will Thorne never forgot the marriage pact he made with Hannah, but he also never imagined he’d be the one to initiate it. One ex-fiancée and an almost-career-ending mistake later, however, he finds himself outside Hannah’s door, on bended knee, to collect on their graduation-night pinky promise.

With both of their futures at stake, Hannah and Will take a leap of faith.

Now, all they have to do is convince their friends and family that they’re madly in love. As long as they follow the list of rules they’ve drafted, everything should go smoothly. Except Will has never been good with rules, and Hannah can’t stop overthinking the sleeping arrangements. Turning thirty has never been so promising.

Hannah’s eyes widened at the boulder-sized princess cut diamond in front of her. Her heart dropped—Brian. A few hours ago, she’d been debating breaking up with him. Was he really proposing on the dirty hallway floor? Hannah blinked rapidly, trapping tears she knew were coming. She’d brought up engagement six months ago. He’d scoffed and disappeared for a week, reemerging with a tan and few apologies. But here he was on bended knee. She turned her attention from the ring to the man kneeling in front of her—the man who was not Brian.

She took in the older, leaner version of the boy she had once known. Memories flooded her brain—study sessions, drunken nights, Wilderness concerts, a graduation-night kiss, and finally, the image of him draped over yet another girl, this one in a bridesmaid dress.

“William Thorne,” she said derisively. Her body buzzed, adrenaline coursing through her. She’d wanted it to be Brian—for him to have finally figured out that he wanted her for more than just the foreseeable future.

She turned her attention back to Will. He remained on one knee but had lowered the ring. A smile, halfway between questioning and amused, played across his face. “This is amazingly uncomfortable. Why do people propose like this?”

“Knights, courting, et cetera and so forth,” Hannah said absently, waving him into her apartment. She peeked around the door, but fortunately, it was late enough that the hallway was empty.

Will stood, pocketed the ring, and came in hesitantly despite his initial grand entrance. Hannah watched his eyes travel around the room, taking in the small clues littered throughout the apartment before focusing on her laptop, which still had a picture of the two of them open. Great first impression.

“You seem surprised to see me,” he said, turning his full attention and the power of his perfect smile on her.

She should’ve felt surprise at Will’s sudden appearance, but she didn’t. And not just because she’d just gotten a friend request from him—this was completely and utterly a Will thing to do. And really, she should’ve been expecting him.

“Well, you are a day late.” On top of the last half a decade. Even as Hannah thought it, she knew she had a hand in those lost years. In the end, it wouldn’t matter—not for them. They would still be Will and Hannah. She knew it, and by the contented expression on Will’s face, he knew it too. 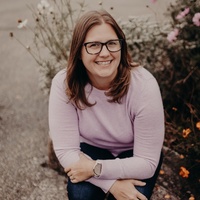 Casey Dembowski loves to write stories that focus on the intricacies of relationships–whether they be romantic, familial, or friendship. Her novels focus on the inner workings of women and how everything in their lives leads them to exactly where they are, whether they like it or not.

The first story Casey remembers writing was in the second grade, though it wasn’t until she turned twelve that she started carrying a battered composition notebook everywhere she went. Since then, there hasn’t been a time when she isn’t writing.

Casey lives in New Jersey with her husband, daughter, and their two cats. She has an MFA in Fiction from Adelphi University and currently works in corporate marketing communications. In her (limited) spare time, she enjoys reading, baking, and watching her favorite television shows on repeat.

1 winner will receive a signed finished copy of WHEN WE’RE THIRTY, US Only.

1 winner will receive an ebook of WHEN WE’RE THIRTY, International.