I am thrilled to be hosting a spot on the REBEL DAUGHTER by Lori Banov Kaufmann Blog Tour hosted by Rockstar Book Tours. Check out my post and make sure to enter the giveaway! 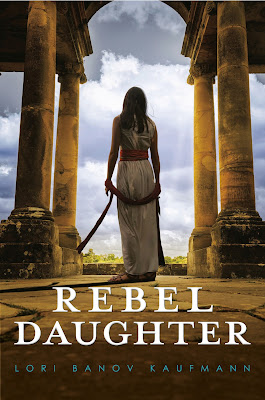 A young woman survives the unthinkable in this tale of family, love, and resilience, set against the destruction of Jerusalem in 70 CE.

Esther dreams of so much more than the marriage her parents have arranged to a prosperous silversmith. Always curious and eager to explore, she must accept the burden of being the dutiful daughter. Yet she is torn between her family responsibilities and her own desires; she longs for the handsome Jacob, even though he treats her like a child, and is confused by her attraction to the Roman freedman Tiberius, a man who should be her sworn enemy.

Meanwhile, the growing turmoil threatens to tear apart not only her beloved city, Jerusalem, but also her own family. As the streets turn into a bloody battleground between rebels and Romans, Esther’s journey becomes one of survival. She remains fiercely devoted to her family, and braves famine, siege, and slavery to protect those she loves.

This emotional and impassioned saga, based on real characters and meticulous research, seamlessly blends the fascinating story of the Jewish people with a timeless protagonist determined to take charge of her own life against all odds.

Based on an incredible true story!

Additional back matter includes an Author Note, which gives historical context and explains author’s inspiration for the book. Included as well is an historical overview by an eminent scholar of the period.

Fans of THE RED TENT and THE DOVEKEEPERS will appreciate this incredibly detailed and accurate depiction of historical events, woven within a richly told and emotionally complex story of growth.

Despite the constraints of society and the savagery of war, Esther is an independent thinker exploring her identity and her faith—and showing unimaginable strength in the face of trauma.

The destruction of the Temple in 70 CE by the Romans is a crucial part of the Jewish story, but it’s often lost amid more well known historical legends. The depiction of Esther’s faith is realistic and moving to a modern audience.

The role of faith and family obligation is explored in depth.

The story will resonate with people who love Biblical history, Israel and stories about faith, courage and family bonds.

“Esther’s remarkable, mysterious, and meticulously researched story is one that demands to be told.”—Kirkus Reviews

“The writing is clear, smooth, and accessible. An engaging story for historical fiction fans.”—School Library Journal

Selected by the Junior Library Guild 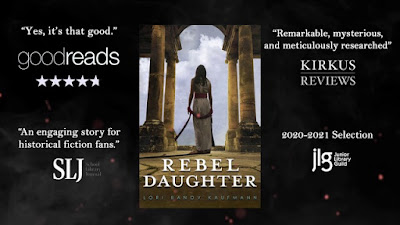 1.Which writer has had the greatest influence on you?

My grandmother. Although she was never published, she always wrote short stories and essays.  Her passion for books and reverence for the written word had a tremendous influence on me.

Even though I always dreamed of becoming an author, I never found a way to fit it into my already bursting-at-the-seams life with 4 kids and a busy career. Finding thirty minutes of “quiet time” to write seemed about as realistic as running a marathon.

At the age of 50, I figured it was either now or never. It took me another ten years to finish so I’m hardly the best person to ask for advice!  I wrote in those stolen moments between work and family, carpools and laundry. But the thing is – those stolen moments eventually add up.

I see myself more as a cautionary tale than an inspiration! ! But I suppose, if I can do it, you can too. It’s never too late.

So my advice? START!!

And my next piece of advice?  Don’t give up, finish! Some writers sprint to the finish line and some (like me) hobble. But if you keep going, you’ll eventually get there.

The Happy Hollisters – a mystery series for children.  We used to get two every month in the mail (remember what that is?)  and my brother and I used to fight over who got to read them first. I also remember pouring over the biographies in the children’s section of the library. I don’t remember any of the books but I still feel the distinctive ink and paper smell of that neighborhood library and the blast of cold air from the noisy air conditioner.

An impossible question! There are so many outstanding books and incredible writers working today.

I love movies that take me back in time to exciting historical events, shown through the eyes of someone there. Movies like Saving Private Ryan, Schindler’s List, and Exodus to name a few.

Like most avid readers, I’ve always had romantic notions of being a writer. Struck by the muse, writing into the wee hours of the night and all that…..Being a writer always seemed more like a fantasy than a realistic career path.

So I never actually decided to become e a writer. I did decide, though, to write this particular 2,000 year-old- love story. When I heard about the gravestone of Claudia Aster (on whose life Rebel Daughter is based), I was intrigued. I wanted to know more and slowly – very, very slowly since it took me 10 years! – I wrote her story. It still feels slightly pretentious to call myself a writer but maybe when I see the published book, I’ll feel like I earned the title!

My corner desk in the attic, surrounded by piles of books, bills, recipes and other unruly papers that refuse to be tamed.

Even though I love to read about (and identify with) bold, adventurous heroines who change the world, I’m probably most like Elizabeth Strout’s grumpy Olive Kitteridge or Agatha Christie’s stubborn old Miss Marple.

Any classic Rock or old Country Music. When I’m sure my kids are at a safe distance away (like in a foreign country), I’ve been known to crank up the Dolly Parton and dance around the living room!

I never feel guilty about the books I’ve read, only about the ones I haven’t.

13.REBEL DAUGHTER takes us back in history to 70 CE,  a tumultuous time for the Jewish community in Jerusalem. What inspired you to write about this particular period of time?

I didn’t set out to write about this period. I fell into it by accident! I was inspired to write Esther’s story after learning about the discovery of her two-thousand year-old gravestone, an exciting and important archaeological find. It was the mystery behind the stone that drew me in and made me want to know more. Who was she? How did a girl from Jerusalem become a Roman woman buried in Italy?

And from there, I began to research the time period. I was stunned that I knew so little about one of the most formative eras in human history. It is a fascinating period that has many parallels with our world today, especially the civil discord and religious fanaticism.

14.You tell the story of Esther, the daughter of a priest. Esther is brave, bold, and unafraid in spite of the challenges she faces as a young woman, including an impending marriage to a man she does not love.  Did you face any challenges in creating a character that was historically accurate yet infused with the ability to see beyond what was expected of her?

Yes! That’s a great question because of course girls in the first-century didn’t have the freedom we’re used to today. Sexism was not only alive and well, it was considered necessary for the proper functioning of society. And I was absolutely committed to writing a book that was historically accurate. I felt an obligation not only to the real historical people whose story I was telling, but also to my readers.

So the challenge was how to portray a bright, curious young woman who lived thousands of years ago. For example, Esther had a thirst for knowledge, an innate human trait. She wouldn’t have gone to school, of course, but scholars have determined that there were women who were literate in first-century Jerusalem. So she probably learned to read and write at home. And in Esther’s case, from her father. I had to show how Esther navigated the very real gender barriers of the time.

15.You explore the daily life in Jerusalem in great detail – from chores and religious practices to the struggles between the Jews and the Romans. Can you share a bit about your research process?

I wouldn’t call it a “process”! It was more like an obsession. I had a sense of obligation to portray the time and setting as accurately as possible and a fanatic attention to detail. I read literally hundreds of books, dissertations and conference proceedings. I also worked closely with the leading historians of this era. Luckily, I live in Israel and had access to the artifacts at the Israel Museum, the archaeological sites all over the country, and the world-class scholars at Hebrew University and Tel Aviv University. My “process” is why this book took me 10 years to write! In retrospect, I realize that I went completely overboard with the research but it truly was a labor of love.

16. What were some interesting facts you discovered that did not make it into the book?

How much time do you have? There are so many! My first draft of the book was over 1000 pages because of all the “interesting facts”. My editor insisted that I couldn’t describe everything – how face cream was made from sheep fat or bread baked in clay ovens.

17.What do you hope readers take away from REBEL DAUGHTER?

I hope readers are taken away! I want them to have the feeling of going back in time. I want them to enjoy the trip. That’s my main hope. And if the experience makes them see our own world in a new light, then that’s a bonus. 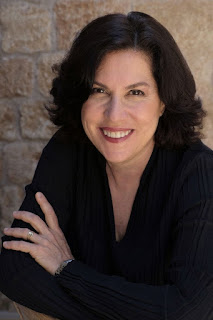 As soon as she learned of the discovery of the first-century tombstone that inspired Rebel Daughter, Lori Banov Kaufmann wanted to know more. She was captivated by the ancient love story the stone revealed and resolved to bring it back to life.

Before becoming a full-time writer, Lori was a strategy consultant for high-tech companies. She has an AB from Princeton University and an MBA from the Harvard Business School. She lives in Israel with her husband and four adult children.