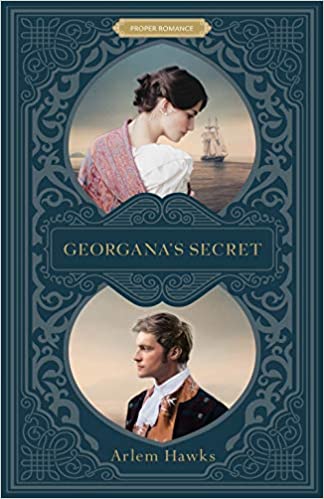 A Regency romance on the high seas.

Georgana Woodall dreams of freedom—freedom from her past and freedom from her secret. She has been living on her father’s ship for years, disguised as a cabin boy named “George.” But hiding her true self is becoming more difficult, and she yearns to break free of her life on the sea.

Lieutenant Dominic Peyton has no time in his life for love, not with his dedication to His Majesty’s Royal Navy claiming his full attention. Determined to prove himself to his new captain, he strives to be an exemplary officer and leader. When he sees the captain’s cabin boy being harassed by the crew, he immediately puts a stop to it and takes the boy under his wing.

Georgana quickly loses her heart to Dominic’s compassion and care, but needing to maintain her disguise as a cabin boy, she is convinced nothing can come of her affection.

Georgana’s Secret is about two hearts yearning to find a safe harbor, and possibly, a lasting love.

So much to love about Georgana’s Secret. I finished it in one day! Naval Historical Fiction, with a touch of romance. Georgana is aboard her father’s ship disguised as a boy, George Taylor. Sea life is hard, disappointing and dangerous. She has lived a life of abuse feeling she is a mistake and a failure. Along comes Dominic. Completely unaware of who she is, gentle and kind to the orphaned ship mate.

This one has a slow moving pace, until the very end, when the action of battle really picks up. There were a few plot pieces which felt a bit off– like her father’s treatment of her, at times, but I still thoroughly enjoyed the rest. There are true to life details which make this feel like a trip back in time between Naval officers in the midst of war. Loved it and can’t wait to read more from the author. Thanks Shadow Mountain for the sneak peek.

Arlem Hawks began making up stories before she could write. Living all over the Western United States and traveling around the world gave her a love of cultures and people, and the stories they have to tell. She graduated from Brigham Young University with a degree in communications and emphasis in print journalism, and now lives in Arizona with her husband and two children